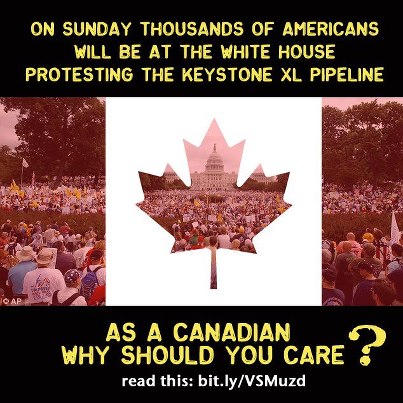 This weekend, thousands of people will be out front of Barack Obama’s White House to protest the construction of the Keystone XL pipeline that will allow tar sands to be pumped from Alberta to refineries in Texas.

Why should Canadian care?

Find out how you can have your voice heard from Canada

Tar sand processing and mining cause significant environmental impacts such as:

In addition, large quantities of water are required for tar sands extraction operations and would draw down surface water flow, adversely impacting stream habitat for fish and other species dependant on local water resources. Drilling one well consumes 5.5 acre-feet of water each year, and the production of one gallon of oil requires thirty-five gallons.

Tar sands are composed of clay, sand, water, and bitumen, a heavy black viscous oil, which can be mined and processed. Extracted bitumen is then refined into synthetic oil and other petroleum products. Because the bitumen cannot be pumped from the ground in its natural state, deposits are mined using energy intensive extraction and separation techniques to separate bitumen from the sand, clay and water. Surface tar sand deposits can be recovered by open pit mining techniques, using large hydraulic and electrically powered shovels to dig up tar sands and transport them for extraction using a hot water separation process. Compressed air and steam injection methods are used to extract deep tar sand deposits, and those methods require large quantities of water and energy for heating and pumping. About two tons of tar sands are required to produce one barrel of oil.