An amateur astronomer says a large hole, which measures about 55 metres by 60 metres and was first discovered on Friday morning by a cabin owner on Dawe’s Lake near Badger in central Newfoundland, must have been caused by an object that fell from the sky. Indeed, it seems that a local had reported hearing a loud noise, perhaps a sonic boom, in the area either late on Thursday night or early on Friday morning.

As shown in the picture, Dawe’s Lake ice cover is hard and is approximately a metre thick, with no snow cover. The area where this happened was disturbed (wave-like pattern of ice piled up at one edge and brocken ice). 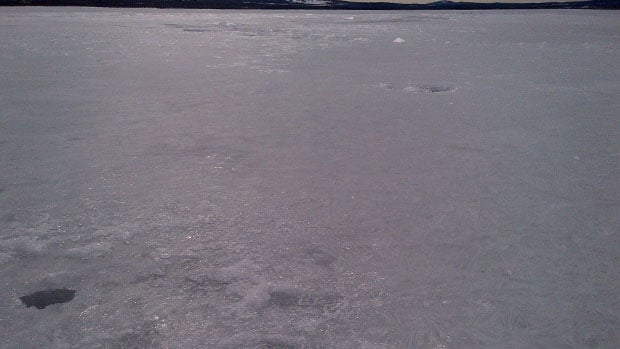 The amateur astronomer is perplexed by this whole. He has no explanations yet. It can only be assumed that something fell out of the sky and hit this lake here although no other evidences near the lake suggest that a meteor struck the ice.

Meteorite, comet, satellite or airplane debris? Well something felt but we do not know what! Anyone interested in checking out the hole should be cautious: the ice has been broken up and is unstable. – CBC