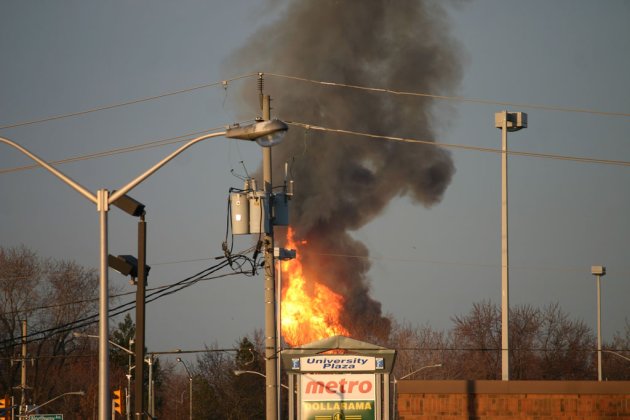 Houses shook, alarms sounded and a fireball exploded into the sky. Fear and curiosity spread through the west end of Windsor Thursday morning at around 7.45 A.M. after a malfunction at the Plains Midstream Canada storage terminal caused an explosion, which the company called a “controlled burn.” Many people first thought they were in the midst of an earthquake. Others thought fighter jets were buzzing over their homes, until they noticed the flames shooting higher than telephone poles as shown in the video.

After first reporting it was a controlled burn, a company representative said in an email there was an equipment malfunction, “which released some product into the terminal’s safety flare pit.” The company gave no details about the malfunction or exactly what caused the explosion. But Windsor’s Chief Fire Prevention Officer Lee Tome said the explosion was sparked by a pipe failure in an underground cavern about 1,400 feet below the surface.

Here some reports from Windsor’s residents:

“I heard something that sounded like fighter jets or something going over my house. My house was rumbling. I come downstairs, my dog is going crazy, so I open up the front door. All I see is big huge flames. Once I opened the door, I could actually hear it. It was like an incinerator.”

“It sounded so close to my house, like it was right over my house.”

“Was just woken up by a huge bang and a shaking house, explosion in west windsor??”

“Felt my house shake, heard a huge rumbling. I thought it was an earthquake!”

“I too felt my house shake”. “It had me worried for a bit. Glad it’s all under control.” – Windsor Star