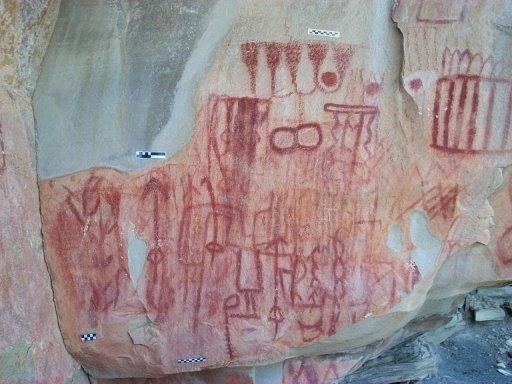 A photo of one of the cave paintings discovered by archaeologists in Mexico near the U.S. border. (Photo: National Institute of History and Anthropology in Mexico)

Nearly 5,000 cave paintings have been discovered in a mountain range in a section of northeastern Mexico near the U.S. border. Archaeologists were stunned by the find, as previous research did not suggest pre-Hispanic groups resided so far north. The red, white and black paintings were found in 11 different sites, and were likely made by early hunter-gatherers. The images depict humans in activities such as hunting, fishing and gathering, and animals like deer, lizards and centipedes.

“The find [is] important because with this we were able to document the presence of pre-Hispanic groups in Burgos, where before we said there were none. These groups escaped Spanish control for almost 200 years. They fled to the San Carlos mountain range where they had water, plants and animals to eat. The Spaniards didn’t go into the mountain and its valleys.” said archaeologist Martha Garcia Sanchez of the Autonomous University of Zacatecas.

In one cave, archaeologists discovered nearly 1,500 paintings and an image of an atlatl, a Hispanic weapon used for hunting previously unseen in paintings in the Tamaulipas region. The weapon was developed in the Upper Paleolithic period, about 20,000 years ago.

The team hopes to take samples of the pigments to determine the actual age of the illustrations. – Nature World News