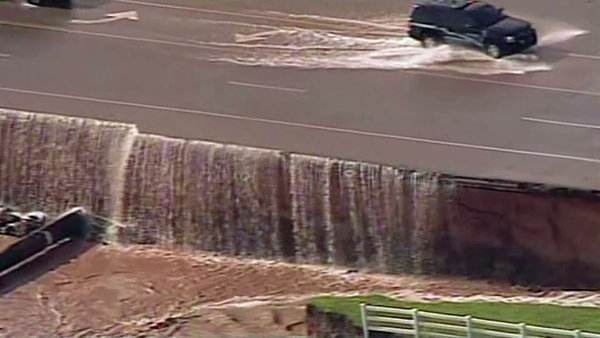 Storms pummeled Oklahoma again yesterday as the full weight of tornado season bears upon the state, and the pressure was too much for one road in the eastern part of Oklahoma County. As shown in the video, the whole side of the road appears to have completely collapsed into the gaping maw of a giant sinkhole.

Somehow cars are still seen driving past the newly-created canyon and waterfall as if they didn’t miss the giant NEWLY-CREATED CANYON AND WATERFALL right next to them. Holy crap, Oklahomans! Don’t you remember the two cars disappearing into the murky Vermont road sinkhole?

In case the last time we covered sinkholes was not clear enough DO NOT DRIVE NEXT TO SINKHOLES.