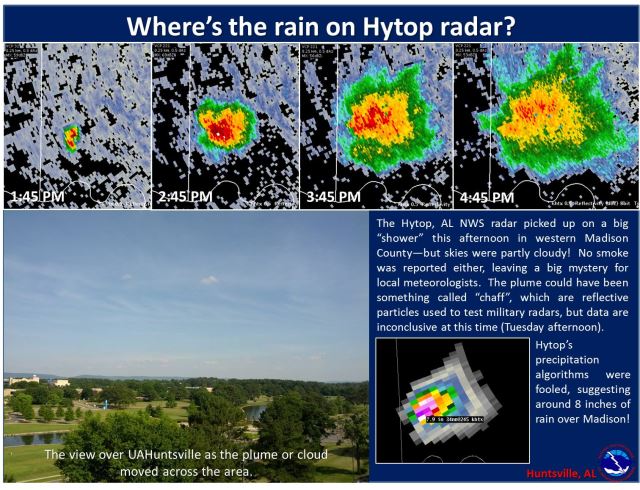 The mystery blob that appeared on radars across the Tennessee Valley on Tuesday, June 4 2013 is still unexplained. The anomaly as it is affectionately being called, started appearing on doppler screens in the early afternoon hours and eventually covered an area nearly the size of Huntsville city limits itself. The blob was accompanied by increased military aircraft activity and numerous reports of strange chemical odors.

Huntsville, Alabama is largely anchored by various military-industrial complex companies, the NASA program and one of the largest US military bases, Redstone Arsenal. Redstone Arsenal is home to new units and personnel as a result of BRAC (Base Realignment and Closure) as well as many classified entities.

To see a headline like this raises many possibilities to mild skeptics and the reckless conspiracy theorists alike. Scanning the internet, many blamed the anomaly on HAARP, which is not farfetched for a number of reasons, but unlikely in this case. Others mentioned chemtrails as it is constantly rumored that new, stealthier geoengineering technologies have been developed of late.

What is known is that there were more than the usual number of military helicopters flying around Tuesday afternoon. It is common to see the occasional training happening in Huntsville skies but there was an increased number of helicopters out, including multiple twin rotor Chinooks and an above average number of civilian copters.

What do you think this was?