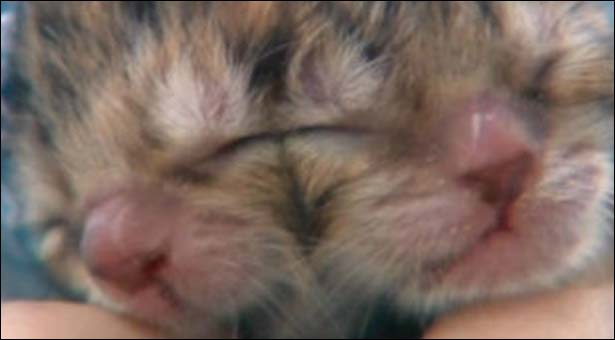 This is very odd, unusual and unexpected: A rare two-faced kitten was born in Amity Oregon on June 11 2013.

Although most die soon after birth, it seems that this tiny kitten with two faces has a healthy body and set of organs.

Bicephaly is a type of abnormal twinning. Complete twinning can only occur very early in development however. If the split begins too late the embryos cannot completely separate, and conjoined twins result. It may also happen when two normal embryos are pressed very tightly together, such that they begin to fuse.

Or is this weird birth related to the Trojan Nuclear Power Plant, a pressurized water reactor nuclear power plant located southeast of Rainier, Oregon, United States, which after sixteen years of service was closed by its operator almost twenty years before the end of its design lifetime. Decommissioning and demolition of the plant began in 1993 and was completed in 2006.