Croatia wants to promote oil and gas in the Adriatic Sea and has started a huge seismic survey of the seabed. Environmentalists warn about consequences of this noise intensive exercise on whales and dolphins.

Seismic tests using airguns have started since this week on the Croatian Adriatic coast to gather some information about oil and gas reserves and thus to pave the way for offshore drilling. International environmental organizations fight against it due to the dangers of extreme underwater noise associated with such tests: sea creatures are injured or even killed. Look how a seismic vessel works:

To search for oil and gas, the industry typically uses arrays of high-powered airguns that release intense blasts of compressed air towards the seabed every 10-12 seconds, for weeks or months at a time. The noise they produce (up to 240 decibels) is almost as intense as dynamite, which airguns replaced in the mid-1950s. This represents an acute threat for whales, dolphins, but also fish stocks and other marine creatures, which will be expelled from ancestral habitats, injured and even, in some cases killed. Croatian survey will be conducted over 12’000 miles from research cruises.

Progress – but not in Europe

The Croatian government has voted for the introduction of measures to protect marine animals from intense underwater noise. But when self-interests are at play no one seems to remember these claims. 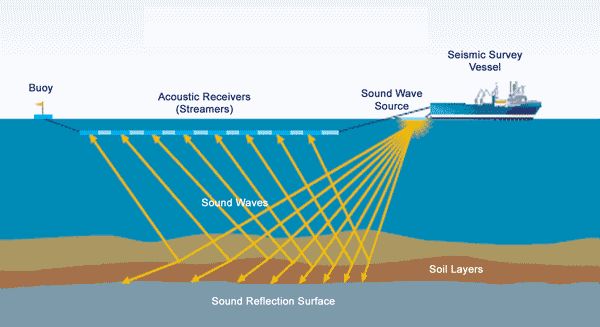 Seismic is more regulated in other places of the world: The USA, for example, regional and temporary closed areas have been relative to a planned seismic survey in the Gulf of Mexico. Moreover, the oil industry is encouraged to develop and use less noisy technologies.

Appeal to the Croatian government

So it would be great that the Craotian government stops noise-generating activities immediately until strict noise mitigation measures are put in place, carries out transparent environmental impact assessments before using intense sources of noise – with the involvement of all stakeholders including the public and stops sonic explosions as soon as marine species are detected in the area. Take action here.