There is a hotspot track cross-cutting the New Madrid Rift System!

And it may explain the reactivation of the New Madrid rift system and seismicity of the eastern United States! 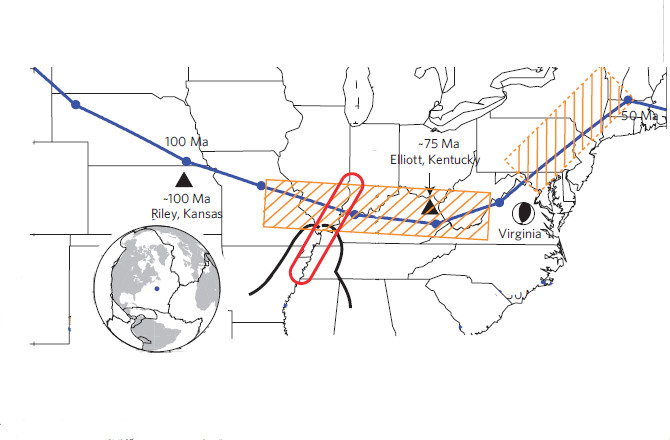 Image: The rectangular boxes show the locations of the seismic anomalies detected by USArray. The blue line shows the track of the hot spot. Black triangles are where diamond-bearing rocks from deep in the mantle have been found. Black and red lines are the boundary of the Mississippi Embayment and the New Madrid rift complex, respectively.  The inset globe shows where the hotspot is today and the ball shows the epicenter of the 2011 Virginia earthquake.

As shown in the above figure, the seismic data has revealed an unexpected scar in the lower part of the crust extending from eastwards from Missouri to Virginia. This seismic anomaly cuts through the New Madrid rift system, which is responsible for some of the most powerful earthquakes in North American history. It also crosses a 75-million-year-old diamond-bearing formation in Kentucky. Despite all this, there is no sign of the hotspot track on the surface:

We identify an unexpected linear seismic anomaly in the lower lithosphere that has both a reduced P-wave velocity and high attenuation, and which we interpret as a hotspot track.

The anomaly extends eastwards, from Missouri to Virginia, cross-cutting the New Madrid rift system, and then bends northwards. It has no clear relationship with the surface geology, but crosses a 75-million-year-old kimberlite in Kentucky.

We suggest that the hotspot track could be responsible for late Mesozoic reactivation of the New Madrid rift system and seismicity of the eastern United States.[/quote_box_center]

Series of 5 Earthquakes Strikes the Eastern Tennessee Seismic Zone in Less Than 5 Hours – M2.7 the Day After