This is just a FULL CIRCLE RAINBOW!

Have you ever experienced such a celestial event? If yes, you are pretty lucky! 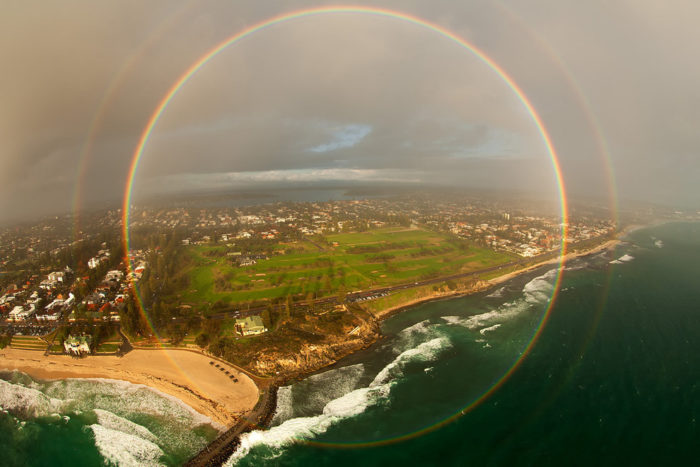 The amazing picture of this circular rainbow was captured over Cottesloe Beach near Perth, Western Australia by Colin Leonhardt and featured as Astronomy Picture of the Day by NASA, which explains:

[quote_box_center]”Have you ever seen an entire rainbow? From the ground, typically, only the top portion of a rainbow is visible because directions toward the ground have fewer raindrops. From the air, though, the entire 360 degree circle of a rainbow is more commonly visible. Pictured here, a full circle rainbow was captured over Cottesloe Beach near Perth, Australia last year by a helicopter flying between a setting sun and a downpour. An observer-dependent phenomenon primarily caused by the internal reflection of sunlight by raindrops, the 84-degree diameter rainbow followed the helicopter, intact, for about 5 kilometers. As a bonus, a second rainbow that was more faint and color-reversed was visible outside the first.”[/quote_box_center]