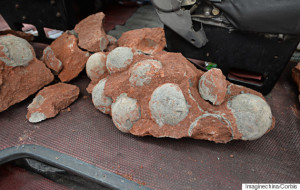 19 of the new dinosaur eggs are completely intact and the largest measures as much as five inches in diameter.

It is still unknown which dinosaur species they belong to.

Nearly 17,000 dinosaur eggs have been discovered in and around Heyuan City, the hometown of the dinosaurs in China, since 1996.