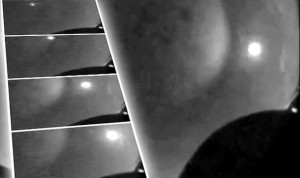 Watch the amazing moment a meteor turned into a fireball as powerful as a nuclear explosion.

Can you imagine? The blast was so visible that the Irish Coast Guard contacted Astronomy Ireland because of too many reports of undetermined distress flares.

Experts believe it broke off from an asteroid in orbit between Mars and Jupiter and headed towards earth at 100,000 mph.

The footage, recorded on Sunday, March 26, 2015, at around 10.10pm by the United Kingdom Meteor Observing Network at Portadown, is almost perfect because the fireball disintegrated much lower – 21 miles above Ireland – than the usual 50 to 70 miles up.