Lake Baikal is the world’s largest freshwater lake by volume, the world’s deepest lake and is considered the world’s oldest lake.

The rift lake located in southern Siberia is also considered among the world’s clearest lakes. Look at its ice, it’s crystal clear.

The high degree of transparency of Baikal’s waters is due to a number of factors.

2. There are few shallow areas along the shores with the result that there is little stirring up of floor silts.

3. Suspended organic matter in part decays and in part is transported to considerable depths to be deposited in sediment under the influence of complex biochemical processes including the activity of Baikal organisms.

5. Baikal acts like a kind of treatment plant, turning out clear, pure water.

In the deep water layer the transparency increases dramatically. This is where the clearest waters are.

To finish, a legend about Lake Baikal’s origin: It is said that a huge stone fell from the sky like they do now, sometimes. While it was falling it became red hot. When it hit the earth there was a great rainfall. Earth, stone, and water came to a boil and in that turmoil Lake Baikal was born.

Awesome, like this crystal clear ice! Sometimes the Baikal’s lake has a green emerald hue. 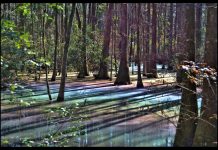 Why these swamps have rainbow colors?