Within the last 32 hours more than 800 tremors – from M0.1 to M3.8 – were reported within a few miles of the main quake’s epicenter area.

As presented in this large list of quakes by Caltech, California, more than 800 earthquakes from 0.1 to 3.8 in magnitude have struck the region.

Although most of these tremors are in the minor to very minor category. The number of 800 is just insane!

The major M5.2 earthquake occurred along the San Jacinto Fault that is part of the California’s San Andreas Fault system. 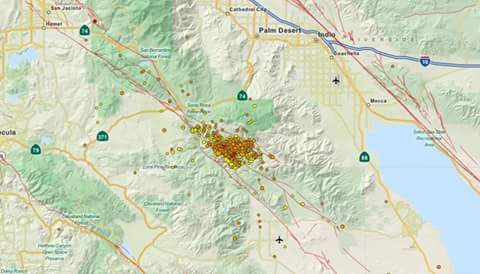 People around Anza reported falling objects, partial power outages, but neither major damage nor injuries have been reported yet.

Be prepared for the next one!