If you’re a person of prayer, we could use your prayers.

That’s what Gatlinburg Fire Chief Greg Miller said Monday evening as crews battled wind gusts of up to 70 mph in and around the town.

Fanned by strong winds and the Southeast’s worst drought in nearly a decade, at least 14 wildfires burned in and around Gatlinburg, Tennessee, forcing evacuations from the popular tourist destination and nearby communities. 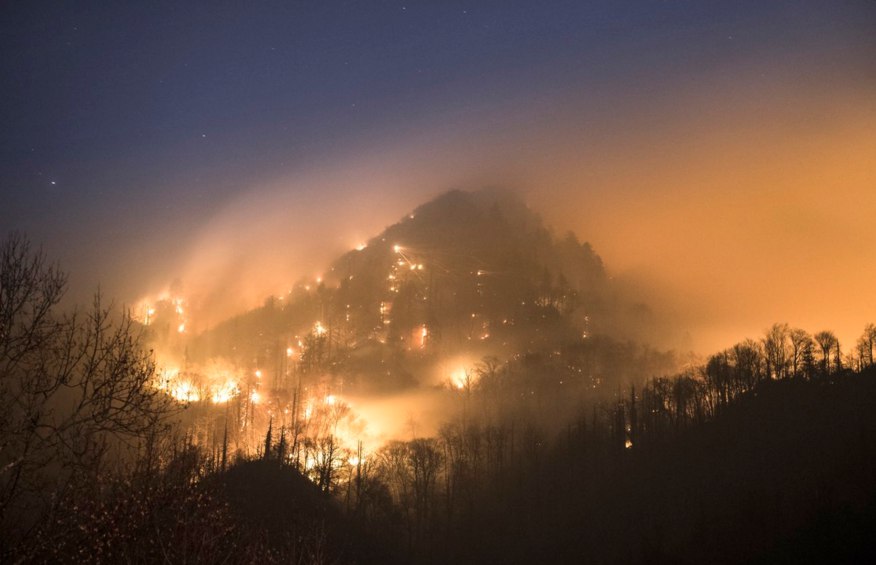 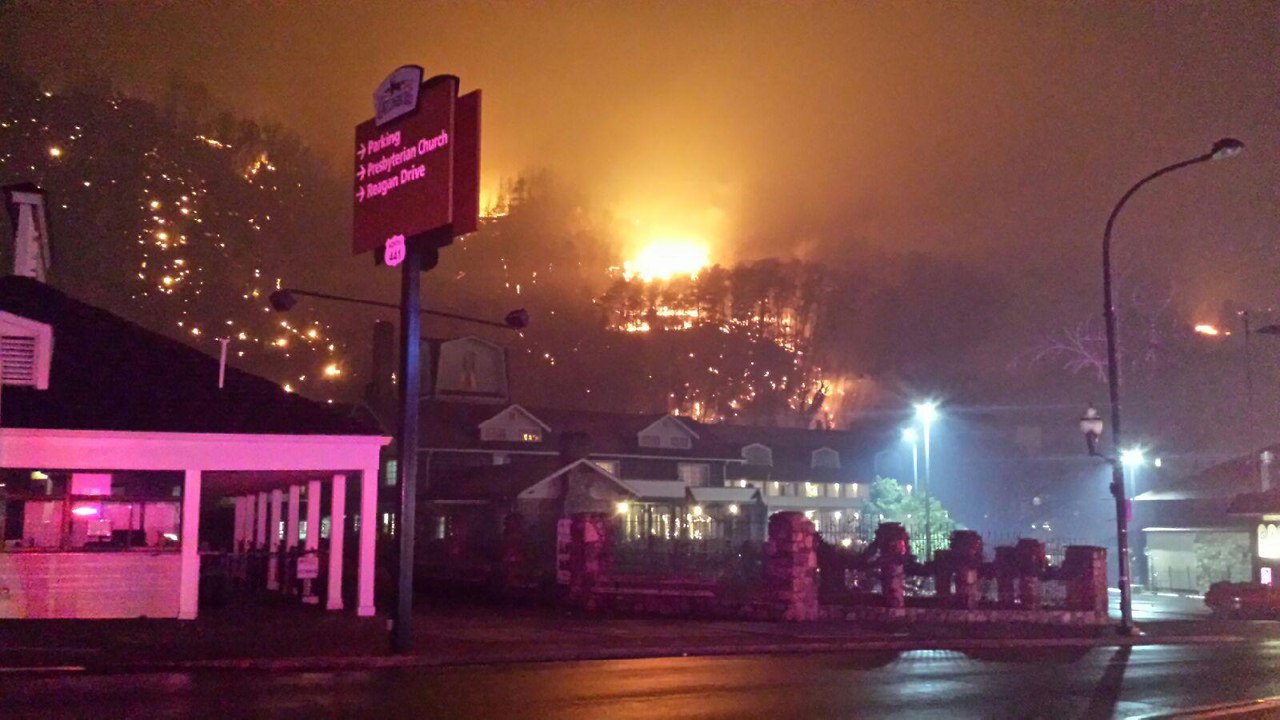 There were no deaths reported in connection with the fires. But a male evacuee reportedly suffered burn wounds and an accident involving a fire truck may have also caused minor injuries. 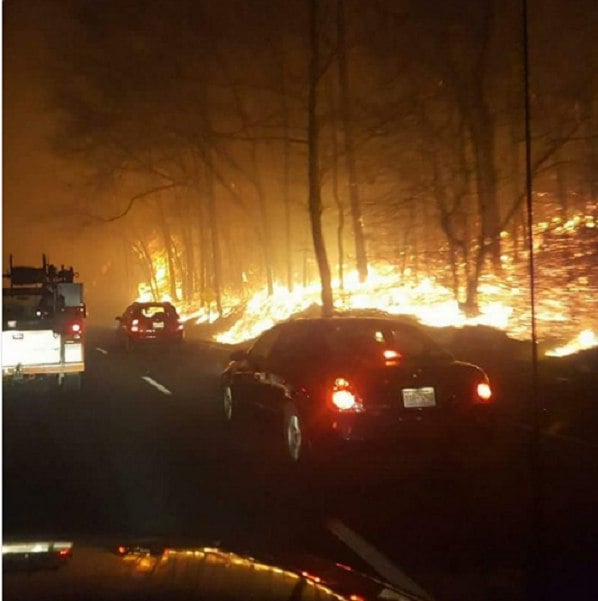 Several homes and businesses in downtown Gatlinburg were “completely lost to fire.” By Tuesday morning, the scope of the disaster was difficult to quantify, with officials unable to give estimates for the number of fires, their size, injuries and how many structures had burned. 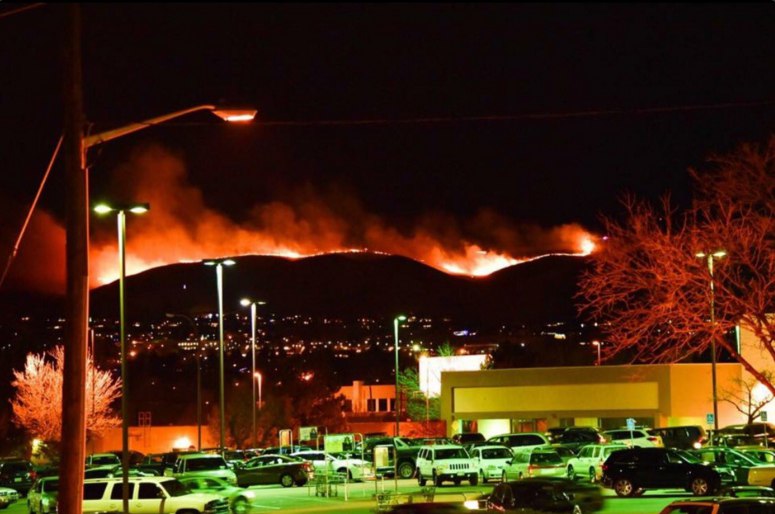 A report hours earlier from TEMA reported at least 30 structures had been impacted, including a 16-story hotel and an apartment complex that was consumed by flames. 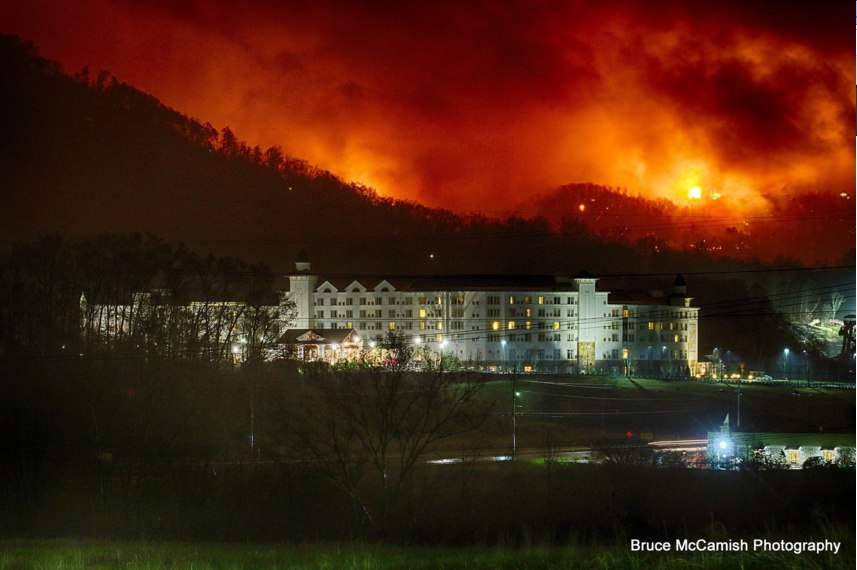 Staff at Ripley’s Aquarium of the Smokies in Gatlinburg were forced to evacuate Monday evening, but all of the facility’s 1,500 animals are still inside. The building is still standing. The facility’s webcam showed lights and power still working inside, but he’s concerned about the deteriorating air quality, as well as the smoke and flames.

Authorities issued evacuation orders for Gatlinburg and nearby areas, including the north end of Pigeon Forge. Nobody is allowed into the city at this time. If you are currently in Gatlinburg and are able to evacuate … evacuate immediately. TEMA said on its website that State Hwy. 441 heading into Gatlinburg is closed except for emergency traffic and the same highway leaving the city is open for evacuations. 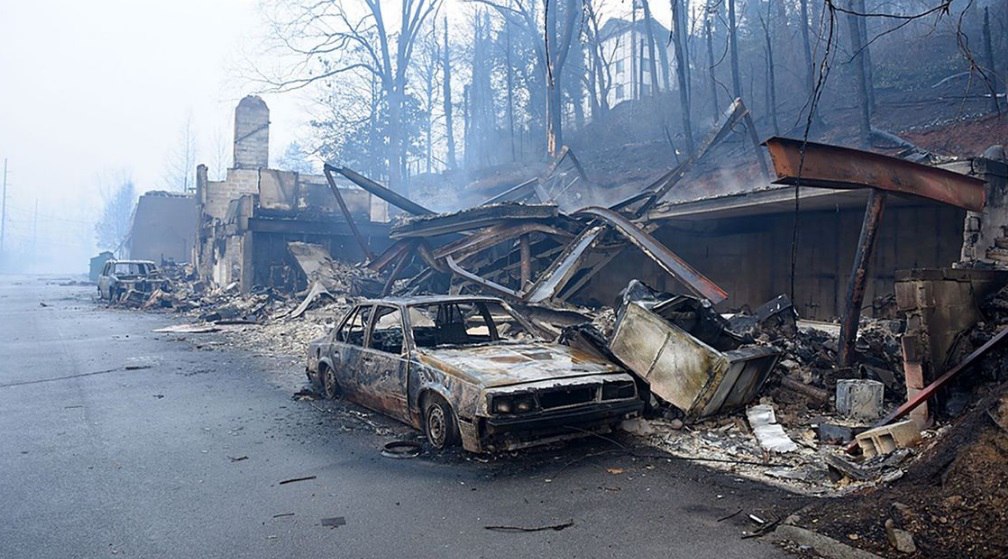 Schools in Green, McMinn and Sevier counties will be closed Tuesday, and more than 12,000 people in Sevier County were without power as of early Tuesday morning. 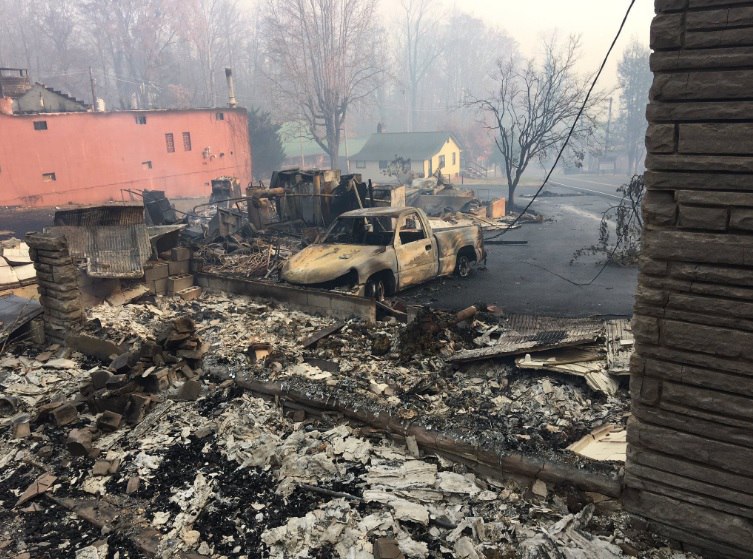 Several evacuation shelters opened as about 1,300 people stayed overnight at the local community center and park. Shaken residents, some needing oxygen after inhaling so much smoke, huddled with each other at the shelters. 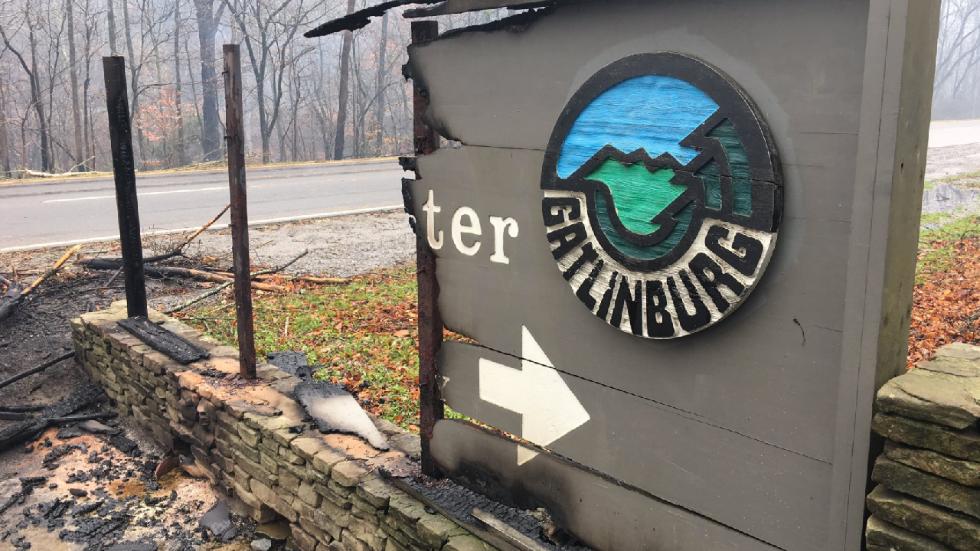 Despite evacuation orders, some people – including guests at one Gatlinburg hotel – could not safely leave the area as the fire advanced. The fire had not reached the hotel, but smoke had permeated the building, making it hard to breathe. Guests stood in the hotel lobby with masks over their faces. They can’t go outside. The wind is blowing at 80 miles per hour and the debris in the air is too hard to get them down right now.

Elsewhere, the Great Smoky Mountains National Park evacuated employees from the Elkmont and park headquarters housing areas on Monday. Due to continued erratic winds, the fires are very unpredictable and more fire growth is expected. 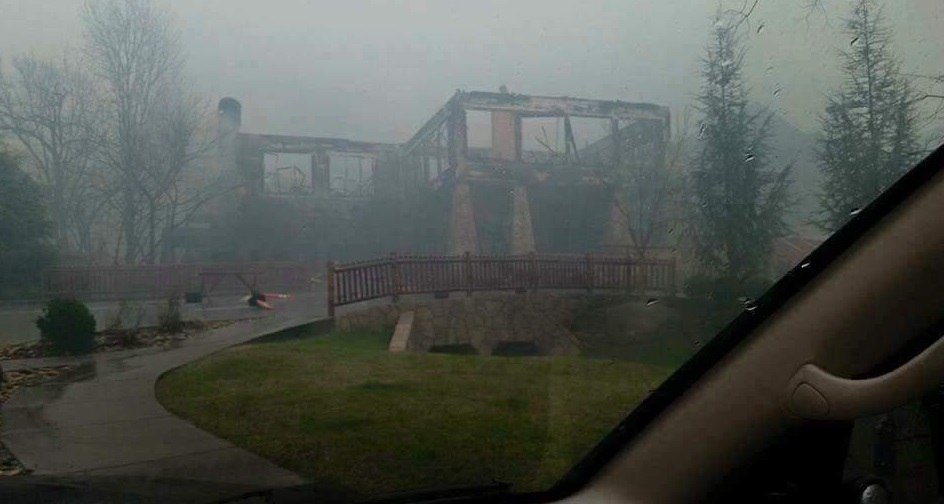 The flames proved unpredictable even for authorities as the fire blew into downtown Gatlinburg, forcing officials to evacuate their original command post at City Hall. The National Guard was activated to help fight the fire and assist in evacuations. 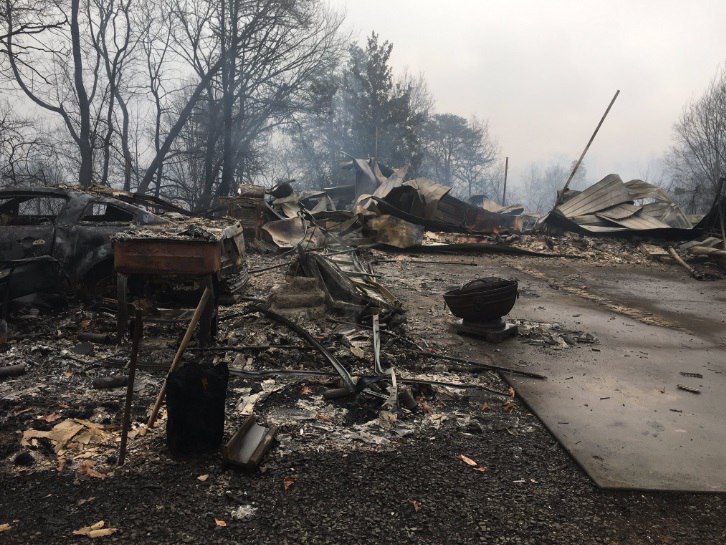 Several roads were closed because of fire danger, stemming from dangerous weather conditions, falling trees and downed power lines. Authorities asked people who have not been instructed to evacuate to stay off the roads as evacuees crammed the streets to get to safety. 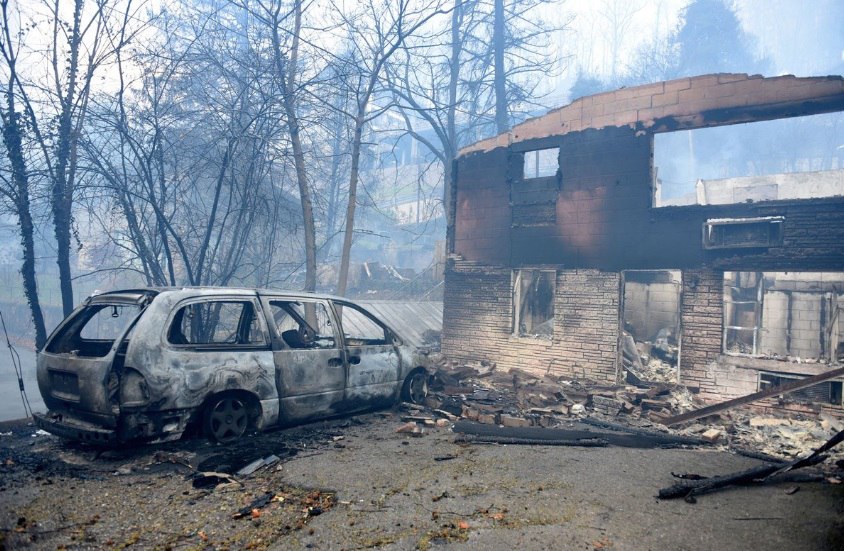 Rainfall should help containing the fires in the next hours… But they will be accompanied by heavy winds. So if you’re a person of prayer, they could use your prayers!