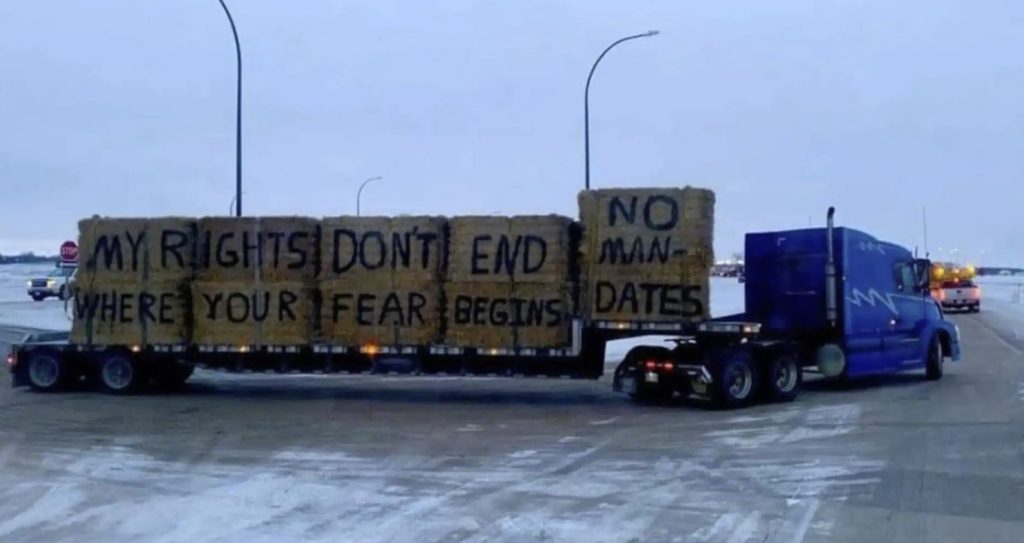 freedom trucker in Canada in January 2022. Picture via FacebookA national truck convoy is making its way through British Columbia, Alberta on Sunday, before heading toward Ottawa, to protest the COVID-19 vaccine mandate for truckers that cross the Canada-United States border.

The convoy is split into several routes. Part of the western route — which passes through Alberta — launched from Prince Rupert, B.C., Saturday morning and stopped overnight stop in Prince George, B.C. It left there Sunday morning, and is scheduled to arrive in Edmonton in the afternoon, then in Calgary Sunday night.

Trucker convoy near the New Brunswick/Nova Scotia border making its way way to Ottawa to protest mandates next weekend.

A second contingent of the convoy launched from Vancouver Saturday morning. It is scheduled to join the other truckers in Calgary Sunday night.

Huge send off rally near Edmonton, Alberta, Canada for truckers joining the freedom convoy to Ottawa to protest mandates. pic.twitter.com/F7c03sJ0Ux

Some truckers from all other provinces will join the Freedom Convoy… Even from Quebec:

According to the group’s website, the convoy should arrive in the country’s capital by Jan. 29.

The trucker freedom convoy is greeted by supporters in Salmon Arm, BC, Canada as it makes it’s way to Ottawa to protest mandates. pic.twitter.com/nSPtPOh9kv

In November, the federal government announced new protocols for unvaccinated people travelling across the Canada-U.S. border. Part of that announcement included changes in the new year for groups of travellers who were exempt from entry requirements, such as truck drivers.

As of Jan. 15, unvaccinated or partially vaccinated Canadian truck drivers, among others, entering the country must get a PCR test outside of Canada within 72 hours of planned entry; get tested when they arrive; and then self-test on Day 8 of a mandatory 14-day quarantine period.

Supporters of the freedom trucker convoy making its way to Ottawa for next weekend’s protest against mandates near Langley, BC, Canada. pic.twitter.com/Uc73nnwdC6

“It’s about the mandates, all of them. Masks, the passports, the shutting down our businesses,” said James Bauder, a supporter in Calgary.

We support #TruckersForFreedom Rise Up for Freedom and Democracy against growing Tyranny and Dictatorship. Support #Truckers Convoy heading to Ottawa, Canadians United from coast to coast stand on bridges or side of the road and wave in solidarity for their courageous efforts👋 pic.twitter.com/xv4iJTqXbX

Lee Parkinson, a supporter in Edmonton, said she used to be employed by the Government of Alberta, but was placed on unpaid leave because she refused to get the COVID-19 vaccine. She has been involved in Action4Canada, a group suing the B.C. provincial and federal governments over the implementation of public health measures.

She said she was hopeful the convoy could bring about some changes she hopes to see.

“They’re big and they’re noisy and they could probably draw a lot of attention,” she said.

Nearly $3 million has been raised for this convoy through a GoFundMe campaign, which says the money will be paid to the truckers so they can afford going to Ottawa.

Truckers are travelling from every province converging in Ottawa. Patriots from all over Canada will be attending. Will stay there until this ends! Convoys are being organized to head to Ottawa. If you wish to join a convoy, details will be listed shortly. Expected date Jan 29. pic.twitter.com/ITeAw3h7dv

“CTA believes such actions — especially those that interfere with public safety — are not how disagreements with government policies should be expressed,” the statement said.

Canadian truck convoy forming yesterday in Vancouver, BC, Canada before it makes it’s way to Ottawa to protest against mandates. pic.twitter.com/MD4EQQbmqt

The federation suggests members opt to hold organized protests on Parliament Hill, or contact their local MP, according to the statement.

The CTA says most people in the industry are vaccinated and that the vaccination rate among truck drivers is similar to that of the general public.

Go! Everybody on the streets! I am all with you, Canadians! Break your gov. down! [CBC]

Reward climbs to $500K for information on suspect who placed pipe bombs day before Jan. 6