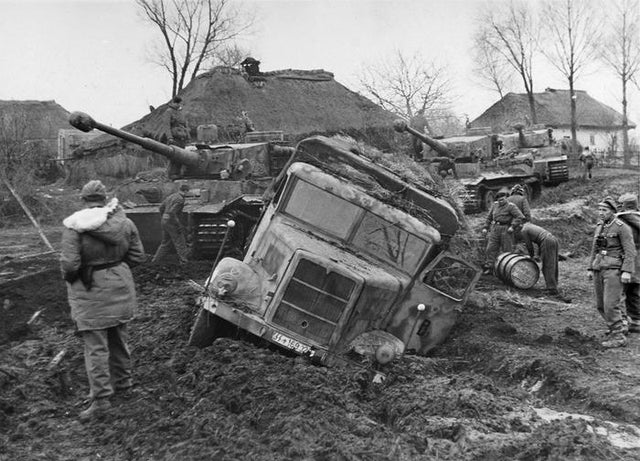 Rasputitsa is a Russian term for two seasons of the year, spring and autumn.

It describes muddy road conditions in Belarus, Russia, and Ukraine, which are caused by the poor drainage of underlying clay-laden soils found in the region.

This weather phenomenon during which roads are subject to weight limitations and closures, is also known as “menföre” (bad going) in Sweden, and “kelirikko” or “rospuutto” (broken going) in Finland.

Rasputitsa seasons of Russia are well known as a great defensive advantage in wartime:

Rasputitsa for Russian operation in Ukraine

Prior to the 2022 Russian invasion of Ukraine, some analysts identified the logistical challenges of the mud season as a likely hindrance to any large-scale invasion in spring.

When Russia did cross the border, many of its mobile units found themselves stranded in fields and limited to major roads, where resistance and logistical issues significantly slowed the advance towards Kyiv.

According to the latest weather forecasts, the phenomenon could appear as fast as mid-March.

For the Russian troops “the situation will worsen as the weather warms up and the rains begin”, confirms Mykola Beleskov. “They will find themselves nailed to the ground,” he continues.

This even happened during Russian drills about 3 weeks ago:

This will force convoys to use asphalt roads and streets or even main roads more exposed to logistical problems or attacks.

According to this french video, a large air-driven offensive is being prepared by Russia (nuclear-head surface-to-surface missiles in Belarus (NO ATOMIC BOMBS; EWOCKS JETS)… Probably because of this freaking RASPUTITSA!