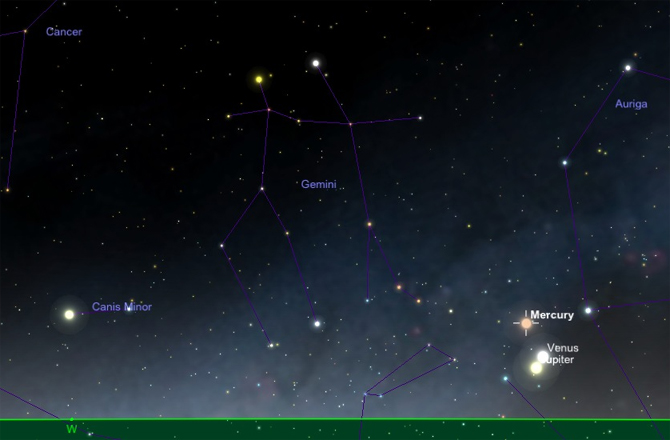 Understanding events in the night sky is much like enjoying a cup of coffee in your favorite coffee shop!

For example, right now, a delicious ‘grande’ mug of decaf skinny peppermint latte is sitting a foot or two behind my screen. From where I am sitting, the screen and cup appear to be right next to each other, yet I know that they are separated by some distance.

This is a great analogy for the many planetary alignments, or conjunctions, we can enjoy in the night sky. And one impressive one is coming on May 28 — Venus, Jupiter and Mercury will seem to gracefully sweep past one another in a tight grouping in the sky, but in reality they are millions of kilometers apart.

I still find it amazing that we can predict such celestial events and even send spacecraft not to where a planet is right now, but where it will be in a few years time when the spacecraft arrives! Totally crazy.

One of the key developments in history that has given us this beautiful ability is the articulation of a set of laws that the planets seem to adhere to during their relentless journey around the sun.

It was Johannes Kepler who documented his three laws of planetary motion back in the first few decades of the 17th Century. The laws are all pretty self explanatory:

1. Planets move in elliptical orbits with the sun at one of the foci.

2. A line joining the sun to a planet — the radius vector — sweeps out equal areas of space at equal intervals of time (basically means planets travel faster nearer the sun and slower further away)

3. The square of the orbital period of a planet is proportional to the cube of its mean distance from the sun.

Using these laws, which fundamentally come from the laws of gravitation, allows us to predict with incredible accuracy how the planets move so we can tell that on May 28th, 2013, Venus and Jupiter will pass within one degree of one other (about twice the apparent size of the full moon). To add a little bit of sparkle, a little further above the horizon Mercury will put in an appearance.

Although they may look close from our point of view, in reality Jupiter will be 660 million kilometers further away than Venus, and 744 million kilometers further away than Mercury, which is the closest of all of them come to us. Mercury is always an elusive planet but the 28th will be a great evening to try and spot it low in the west after sunset.

If you want to try and spot this beauty of a conjunction then wait until the sun has set and the western sky has started to go dark. Look out for two bright ‘stars’; the lowest will be Jupiter, above and brighter will be Venus and higher up and a little fainter than both of them will be Mercury.