If you think you are safe from geomagnetic storms, think again. A new study just published in the journal Space Weather finds that powerful storms may be twice as likely as previously thought.

Jeffrey Love of the US Geological Survey, who authored the study, analyzed Earth’s strongest geomagnetic storms since the early 1900s. Previous studies looked back only to the 1950s. The extra data led to a surprise:

“A storm as intense as, say, the Québec Blackout of 1989 is predicted to occur, on average, about every four solar cycles. This is twice as often as estimated using only the traditional shorter dataset,” says Love. 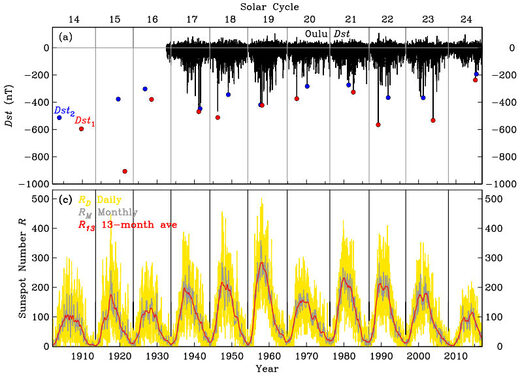 Above: The data Love used in his extreme value analysis. Red and blue circles denote the two strongest storms in each solar cycle. Dst is a measure of geomagnetic activity that can be estimated from old magnetogram chart recordings.

A study like this is part physics, part math, and part detective work.

Love has spent recent years digging deeply into historical records, trying to figure out how often intense geomagnetic storms occur. It’s tricky. Even when old records of magnetic activity are published, they aren’t always easy to find or interpret. Love recalls the example of Vassouras, Brazil, where important magnetic data were recorded during the Great Geomagnetic Storm of May 1921:

“My colleague, Hisashi Hayakawa, discovered that a copy of the Vassouras yearbook (an annual summary of magnetic data) was held in a Japanese archive maintained by the World Data Center in Kyoto. In that yearbook is a copy of the magnetogram we needed. It is in fragments, upside down, and mislabeled, all of which had to be sorted out. I digitized it myself, and we were able to use the data to estimate the intensity of the 1921 storm.”

Above: A mixed-up fragment of a 1921 magnetogram chart recording from Vassouras, Brazil.

Tricky indeed. Love did similar digging for other storms as far back as Solar Cycle 14, which peaked in 1906. Ultimately, he was able to piece together a list of the most intense events. The top two storms of each solar cycle formed his dataset.

Then the statistics began. The methods Love used are not new, per se, but they are new to the field of space weather. Love explains: “Extreme-value statistical methods were developed by statisticians in the 1920s to 1940s. From there, it took a while for the methods to be distilled down and presented in an approachable way for non-statisticians. They are really only now starting to be used in the space weather community.” 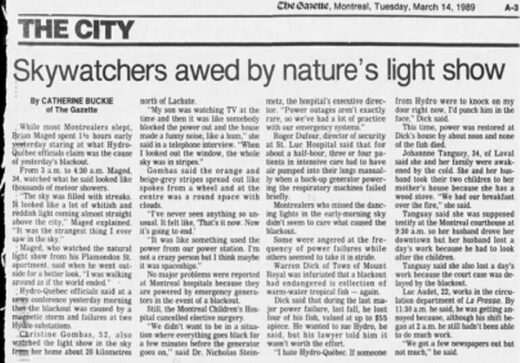 Above: The morning after- a March 14, 1989, report of the Great Quebec Blackout in Montreal’s newspaper, the Gazette.

An important result of Love’s research is the odds of another Québec-class storm: On March 13, 1989, a coronal mass ejection (CME) slammed into Earth’s magnetic field. It hit with unusual force, because a previous CME had cleared a path for it. Within 90 seconds of impact, the Hydro-Québec power grid failed, plunging millions of Canadians into darkness.

As the geomagnetic storm intensified, bright auroras spread as far south as Florida, Texas, and Cuba. Some onlookers thought they were witnessing a nuclear exchange. Decades later, power grid operators are still figuring out how to protect their systems from a repeat calamity.

Québec was once thought to be a 100 year storm. Extreme value statistics suggest a different answer. “It’s more like 45 years,” says Love.

In other words, the chance of storms just doubled. [AGU, SpaceWeather]