These strange and somewhat unexpected forms have been carved and dug (pockmarks: craters in seabed caused by fluids – gas and liquids – erupting and streaming through the sediments) by glaciers and icebergs in the seabed sediments. Let’s discover some of the weirdest!

1. Gigantic “9” Carved in the Barents Sea sediments. It makes you think icebergs can count? Well at least one! And it’s probably the world’s largest digit 9 as its drawing would have had required a 60 meter wide pen.

These lines and scribbles on the seabed have been made when glaciers overturned during the last ice age. Before starting their travel accross the world following the global ocean currents, some have come in contact with the ocean floor. As the sea bottom is soft and mostly consists of fine-grained sediments, mainly gravel containing cla, icebergs leave sometimes astonishing seabed scours.

2. Dragonfly on the bottom of the of the Norwegian Sea. Such large dragonflies never existed on Earth. But they exist on seabeds 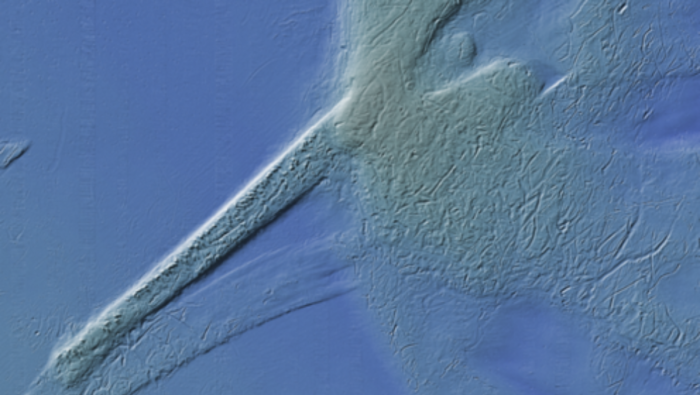 Dragonfly on the bottom of the of the Norwegian Sea. Photo: Mareano

How are these ocean floor maps created?

As part of the mapping process images of the seabed are captured by means of pulses from a surface vessel. Sound pulses are reflected from the bottom and all measuring points are used to create a terrain model of the seabed.

3. Ornamental seabirds’ head. These iceberg marks in the Barents Sea form a kind of bird’s head. Do they tweet?

4. Oceanic dorsal? This iceberg didn’t dig into the ground but created a small “hill” range.  This formation is still unexplained but some glaciers have already raised seabed behind them.

5. Arabic Message? After the amazing “9” from above, it seems that icebergs were also trying to learn arabic. Better in the world of today.

6. Post Scriptum (P.S.) I forgot this one! I really start to believe icebergs can speak our language!