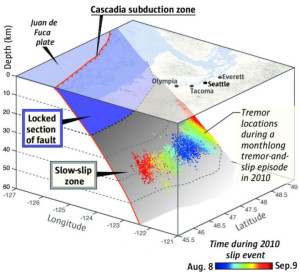 The Cascadia Subduction Zone is so weak and slippery in places that minuscule tidal forces produced by the sun and moon are enough to cause tremors.

Yes, deep part of Cascadia fault is so slippery that sun and moon trigger tremors!

The quakes involved are so tiny they’re imperceptible to people. But they’re part of a recently discovered process called slow slip that ratchets up pressure on the offshore fault called the Cascadia Subduction Zone — boosting the risk of a megaquake and tsunami.

What are slow slip events?

Moreover, a clear link exists between tremor rates and tide cycles in the complex topography of the Pacific Northwest. During some phases, the minute changes in pressure encourage tremor; during other phases, tremor is inhibited.

So what’s the deal?

There is a possibility — but no guarantee — that there will be some enhanced tremor or slow slip prior to the Cascadia megathrust.

The last time the Cascadia fault snapped was in 1700. This means that hundreds of slow-slip episodes — and countless tidal cycles — have played out since then without triggering a seismic cataclysm.

The next slow-slip event is expected to begin sometime this fall or winter.