There is something weird and somehow terrifying happening right now at some of the most dangerous volcanoes in the Cascade Range in northwest United States.

Namely, Mt Hood, Mt Rainier and Mt St. Helens have been rattled by large earthquake swarms simultaneously in the last few days. Is an eruption of one or more of the major volcanoes in the northwest United States imminent?

It is certainly not unusual for each of these volcanoes to experience earthquake swarms from time to time, but right now we are seeing this happen at all three volcanoes simultaneously, and this comes at a time when seismic activity along the Ring of Fire is on the rise all over the planet.

Over the last 8 weeks, there have been over 130 earthquakes and many more earthquakes too small to be located. The earthquakes have low magnitudes of 0.5 or less; the largest a magnitude 1.3.

Scientists believe this seismic activity is linked to the magma chamber recharging.

A series of 62 earthquakes rattled Mount Hood Volcano, Oregon within 24 hours on May 15, 2016 and over the past month at least 96 earthquakes hit the dangerous volcanic peak, mostly on its southern side.

It seems these earthquakes are occurring along a fault three miles deep on the south of the volcano. Is magma ascending?

In the past 30 days, Mount Rainier has been hit by ‘only’ 37 earthquakes but an eruption of this volcano would have more catastrophic consequences as it sits very close to major population centers.

The series of quakes is centered directly along the core of Mt. Rainier.

In an average month, the PNSN locates 3 to 4 earthquakes within 3 miles of the summit – far less than what it is actually experiencing. While earthquake swarms are rare beneath Rainier, they do occur on occasion. The most notable swarm occurred between September 20th and 22nd 2009, when over 1000 earthquakes were detected. Scientists believe that earthquakes at Mount Rainier occur by hydrothermal fluids “lubricating” existing faults within basement rock underlying the Rainier edifice.

All these volcanoes and the others sitting in the Cascades will someday have another massive eruption.

Let us just hope and pray that we have a lot more time until that happens. 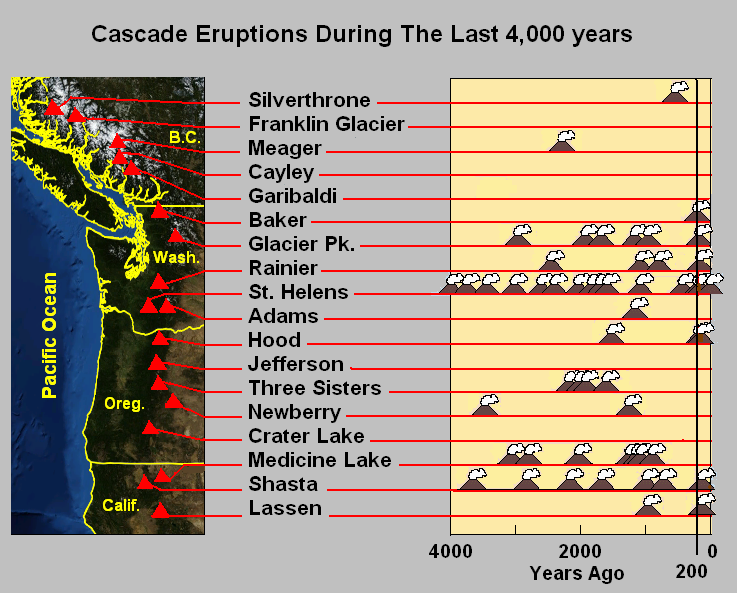 But unfortunately, the crust of our planet is becoming increasingly unstable, and the west coast of our country sits directly along the Ring of Fire. It is only a matter of time until a major seismic event strikes, and it may be a lot sooner than a lot of people think.