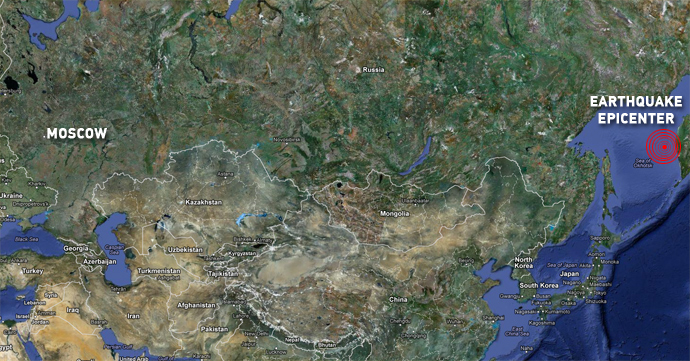 Almost the entire continent was shaken by a major 8.2 earthquake in the Sakhalin region. Tremors have been felt all across Russia and in Europe. Although the magnitude of the tremors felt in Moscow was no higher than 1 on the Richter scale, residents informed security services of vibration and tremors that caused furniture and kitchen utensils to move. The epicenter of the quake was deep – around 600 kilometers. This explains the tremors felt over long distances.

At the moment there’s absolutely no threat of tsunami, no buildings are destroyed, there are no injured and people are not in danger.

However, I think this earthquake may have been the cause of the sudden eruption of the Chirinkotan Volcano, a remote volcano in the northern Kuriles as the MODIS sensor onboard the NASA Terra satellite suggests that a plume of gas and steam, and possibly some minor amounts ash were ejected this morning.

The Chirinkotan volcano is indeed at the far end of a volcanic chain extending nearly 50 km west of the central part of the main Kuril Islands arc. So near to the epicenter of the Okhotsk Sea Earthquake. Moreover, the eruption occurred hours after the seism. 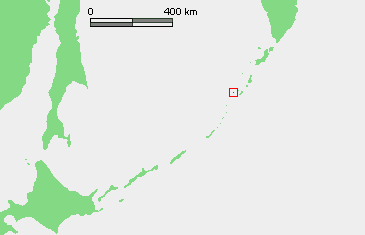 Stress changes caused, high amplitude seismic waves and violent shaking during the large earthquake may have:

Well, in any cases, Russian seismic forecasters say that another quake with the magnitude of over 7 is expected to hit the Sakhalin region in the coming week. So get ready for more and heavier volcanic eruptions!