This weekend, there is a supermoon eclipse.

The Harvest Moon, the full moon of september, will be eclipsed by Earth coloring the moon blood red.

This weekend’s full Moon, The Harvest Moon,  is a supermoon, meaning that it is positioned as much as 50,000 km closer to Earth than other full Moons of the year.

On Sunday evening, Sept. 27th, the supermoon will be eclipsed. It will indeed pass through the shadow of Earth, turning the lunar disk a cosmic shade of red.

To view an animation of the eclipse and to find out when to look click on the image below: 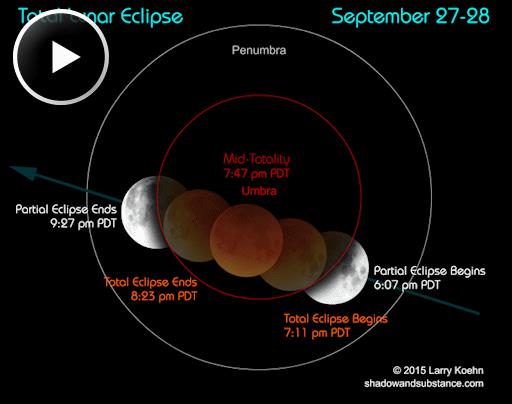 So what makes the eclipsed Moon turn red?

[…] Imagine yourself standing on a dusty lunar plain looking up at the sky. Overhead hangs Earth, nightside down, completely hiding the sun behind it. The eclipse is underway. You might expect Earth seen in this way to be utterly dark, but it’s not. The rim of the planet looks like it is on fire. As you scan your eye around Earth’s circumference, you’re seeing every sunrise and every sunset in the world, all of them, all at once. This incredible light beams into the heart of Earth’s shadow, filling it with a coppery glow and transforming the Moon into a great red orb. […]

But red isn’t the only color you can observe. Actually, some spots of the moon may also turn turquoise as shown in the following picture of an eclipse in March of 2007:

So why did it turn turquoise, then?

Because of ozone. Indeed, during a lunar eclipse, most of the light illuminating the moon passes through the stratosphere where it is reddened by scattering. However, light passing through the upper stratosphere penetrates the ozone layer, which absorbs red light and actually makes the passing light ray bluer.

To observe the turquoise hue on Sept. 27-28, you should look during the first and last minutes of totality. The turquoise rim is best seen in binoculars or a small telescope.

Enjoy this total Supermoon lunar eclipse, the Blood Moon… And the Turquoise Moon!