A blood red moon lit up the sky across the world during a partial lunar eclipse on August 7, 2017.

The spectacular spaceweather event was best-viewed in the Indian Subcontinent, but striking images were also captured in locations as diverse as Poland, Indonesia and Spain, where it glowed over buildings for hours.

Sunlight was refracted in the Earth’s atmosphere, giving the moon a striking dull red or copper colour. The moon passed through the Earth’s shadow exactly two weeks ahead of the extravagant solar eclipse on August 21.

Here some of the best pictures captured around the world:

Here a video from Poland:

Caught a bit of the partial #lunareclipse from #Poland! It was at maximum when I took this video. Enjoy! ? pic.twitter.com/BASoGzyvmq

Do you have other pictures to share of this blood moon and lunar eclipse? 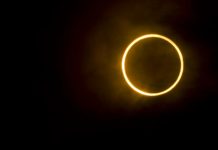