UK food prices are expected to rise in the new year…

The latest floods in northern England have decimated crops, winter vegetables such as potatoes, cauliflowers and cabbages as well as delayed planting.

2019 wasn’t a good year for the food industry… And it seems it will get even worse in 2020. Flooding along the Missouri River has stretched on over 8 months now, and there is no end in sights. Meanwhile, the latest floods in northern UK have ruined crops, winter vegetables and delayed planting that flood analysts say food prices are set to skyrocket… And the trend has already begun!

Official data released on Friday revealed a “great deal of uncertainty” around the fate of a 10th of the country’s potato crop as farmers count the cost of the deluge that has overwhelmed parts of South Yorkshire, Lincolnshire and the Midlands.

“There are increasing reports of crops being abandoned or farmers halting lifting but remaining hopeful that they might salvage something in the spring,” said analysts at the Agriculture and Horticulture Development Board (AHDB) in their weekly update. With some potatoes rotting in standing water, the report adds: “There remains a great deal of uncertainty over the fate of the crop area yet to be lifted. An estimated 2-3% of the area is expected to have to be completely written off.”

Lincolnshire is also behind 60% of the domestic brassica crop, which runs to cauliflowers and cabbages at this time of year. The British Growers Association (BGA) said sodden ground was making it difficult to get the produce out of the fields, with cauliflowers hardest hit – repeating a situation seen over the summer.

Jack Ward, the BGA chief executive, said: “The conditions underfoot are seriously wet so moving around is incredibly difficult. The actual rate of harvesting is much slower so there is less product available and there is evidence to suggest cauliflowers are running short. Cauliflower is sensitive and there is a colouration issue; the spec is brilliant white, which is difficult when you are knee-deep in mud.”

Last year’s potato crop was the smallest for six years, with growers harvesting 1.1m fewer tonnes than the year before. The full extent of price increases as a result of the floods will not be known until the end of the month, but analysts at the food price analysts Mintec said the price for potatoes in the UK were 8% higher in the first week of November than last month.

The poor 2018 harvest has already put pressure on crisp prices this year with KP-owned brands such as Hula Hoops, McCoy’s and Tyrrells seeing increases ranging from 9% to 22%, according to the Grocer magazine.

Vernon Mascarenhas, director of the Covent Garden wholesaler Nature’s Choice, which supplies 400 restaurants in London, said the supply of some domestically grown vegetables was tightening, with Savoy cabbage, in particular, hard to obtain.

There had been a slight increase in the price of potatoes, Mascarenhas said, as stocks were sold through but he predicted prices could double in the new year: “The big conversation is not about the run-up to Christmas but what happens in January and February – that is when we start to see shortages of products. The price of chips in your chippy will become very expensive.”

The NFU said a sweep of farmland – running from the south-west through the Midlands and into Yorkshire – had been affected by two months of heavy rain. Its deputy president, Guy Smith, said the conditions had prevented some farmers from planting next year’s crops. “They haven’t been able to get on the land on what is a critical window for arable farmers,” he said. “There are no clear stats but on the grapevine it’s estimated that only 30% of seeding has taken place.”

If it stops raining, farmers could make up for lost time, he said, though farmers “underwater” were unlikely to be cultivating this side of April. “It is certainly a bad start and will compromise yields because generally speaking the later you drill, the lower the yield,” said Smith. “The irony is last August we were going into Defra [Department for Environment, Food and Rural Affairs] to discuss a once-in-a-generation drought.”

UK soil is like a sponge. It soaks up water until it’s full. Now UK farmers have reached that stage where the water is just sitting on top.

And that’s truely devastating for all UK. Farmers say that only 30-40% of winter wheat is planted when it should nearly all be planted by now. Officials might have to import oil-seed rape and milling wheat next year as a result. And this again means skyrocketing prices. Be ready and prepare now! [Guardian] 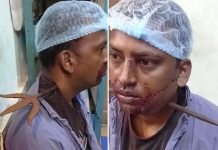