A record-breaking “bomb cyclone” that began its development over the U.S. East Coast on Friday is bringing an exceptional insurgence of mild air to the Arctic. Temperatures around 50 degrees (28 Celsius) above normal could visit the North Pole on Wednesday, climbing to near the freezing mark.

It’s a highly unusual and extreme bout of circumstances, particularly considering the North Pole is still in a nearly six-month period of darkness known as “polar night.” The sun doesn’t fully rise above the horizon between fall and spring equinoxes, contributing to the bone-chilling temperatures customary to the inhospitable region.

Highs in the lower 30s (0 Celsius) are not terribly unusual in the summertime, but they’re far from the norm in winter. The mild temperatures are also accompanied by liquid rain at far northern latitudes, hastening the seasonal melting of sea ice.

“Looking back over the last few decades, we can clearly see a trend in warming, particularly in the ‘cold season’ in the Arctic,” Ruth Mottram, a climate scientist with the Danish Meteorological Institute, wrote in an email. “It’s not surprising that warm air is busting through into the Arctic this year. In general we expect to see more and more of these events in the future.”

In Hopen, an island off Svalbard in the Barents Sea at 76 degrees north latitude, the temperature recently hit 39 degrees (3.9 Celsius), its highest March temperature on record.

Mottram connected the intrusion of warm air to an atmospheric river — or concentrated jet of moisture — steered north by the bomb cyclone. A bomb cyclone is a storm or zone of low pressure that intensifies at breakneck speed.

The cyclone formed along the U.S. East Coast on Friday and Saturday, unleashing heavy snow and strong winds. Next, on Sunday and Monday, it tore through Atlantic Canada, where its pressure plummeted to that found at the core of Hurricane Sandy in 2012. Then it swept toward Greenland.

“It appears that a new record has been set for lowest pressure on record anywhere in Greenland at 934.1 hPa measured at the [Danish Meteorological Institute] station at Ikermiuarssuk,” Mottram said. The pressure reading hasn’t been officially certified as a record, but Mottram notes that it is consistent with other observations and model forecasts.

Average sea-level air pressure is closer to 1,000 hPa (hectoPascals); the resulting deficit was akin to removing 6.6 percent of the atmosphere’s mass from the middle of the storm — hence the strong inward winds aimed at “filling the void.” That entrained a strip of warm, moisture-rich air or atmospheric river that snaked poleward.

The NOAA HySplit model, which calculates the trajectories that air took to reach its destination, reveals that the air mass trucked north by the bomb cyclone curled east of Greenland and over Iceland during the weekend. Weather models indicate the same plume of warmth will reach the North Pole on Wednesday with temperatures between 29 and 33 degrees (near 0 Celsius).

Researchers probe Arctic warmth as sea ice levels hover at record lows
It just so happens that a team of research scientists studying warm air intrusions has been stationed at Kiruna in northern Sweden waiting for an event like this. Since Saturday, they’ve been flying a specially outfitted German aircraft called HALO, or High Altitude and Long Range Research Aircraft, between the North Pole and the approaching warm plume. The parent study is known as HALO-(AC)³. It is being steered by researchers from the University of Leipzig in Germany and involves multiple European meteorological institutions.

“This is exactly the situation we aim to cover with the ongoing 6-weeks campaign,” the team said in a statement via email. “We are trying to put together some of the puzzle pieces of the so-called ‘Arctic Amplification’ (stronger warming of the Arctic compared to [mean] global warming). And warm air intrusions are actually one of the candidates to explain this phenomenon.”

The Arctic is warming three times faster than the rest of the planet, and atmospheric scientists are trying to better understand the processes contributing to such swiftly rising temperatures.

Thus far, the team has observed a number of phenomena that display telltale climate implications, many of which have been spurred by the sudden warm-up.

“For example, heavy rain over sea ice,” wrote the team. “This might have serious implications on a possible early melting of the sea ice, and this in the mid of March!”

The team also encountered tall convective clouds, or clouds energized by vertical heat transfer in the atmosphere. Some had blossomed almost as tall as clouds usually found in the tropics.

“Surface temperatures in the Fram Strait are currently more than 20 degrees Celsius higher than expected from the long-term records,” the team continued. “It is not just the intensity of the current warm air intrusion, but also the duration, which seems unusual. There are indications from forecast products that the sea ice will be seriously disturbed by this massive warming event.”

According to the National Snow and Ice Data Center, current sea ice extent, defined as the area with at least 15 percent sea ice coverage, is scraping the bottom of the barrel. At present, it’s on pace to fall below the record minimum set in summer of 2012, which may occur if current trends continue. About 14.6 million square kilometers are iced over, compared with a mid-March average of 15.5 million square kilometers. 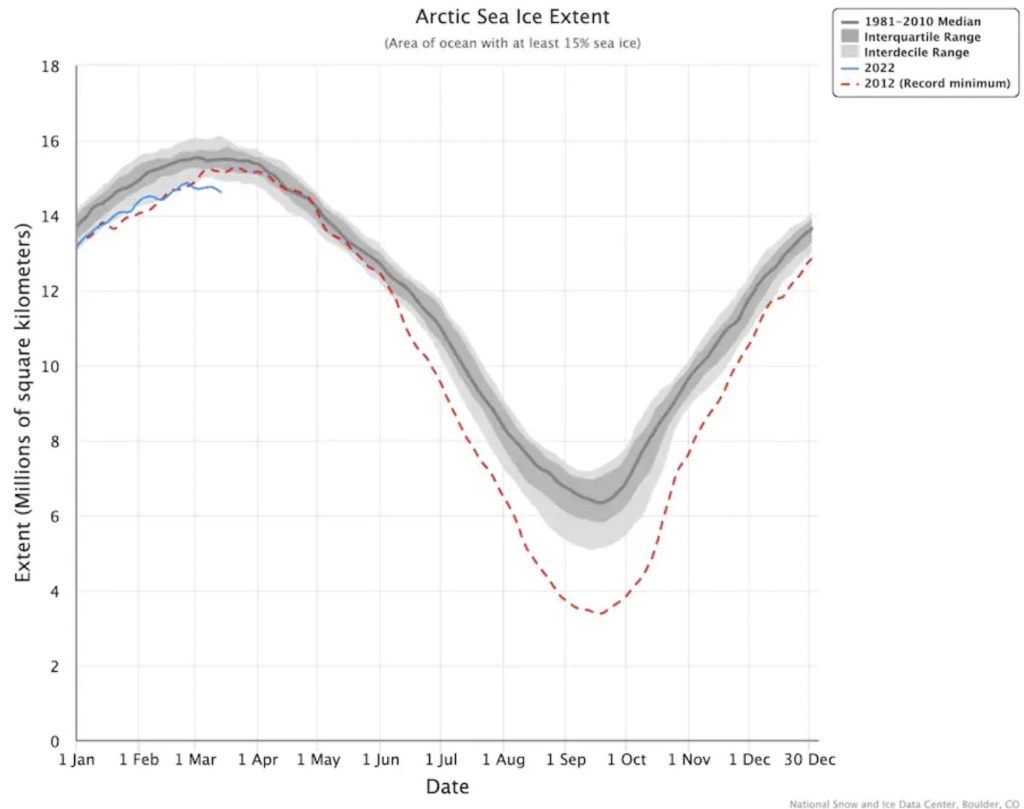 The pulse of warmth over the Arctic is one of many that have swelled over the region in recent decades. A 2017 study found warm winter events in the Arctic are becoming more frequent and longer lasting. From 1980 to 2016, an additional six warming events occurred per winter at the North Pole, lasting on average 12 hours longer, compared with the period from 1893 to 1979. [TWP]