Snow, low temperatures and hail… The weather war is raging… They are now targeting parts of the US breadbasket, Nebraska, among others… Be ready! 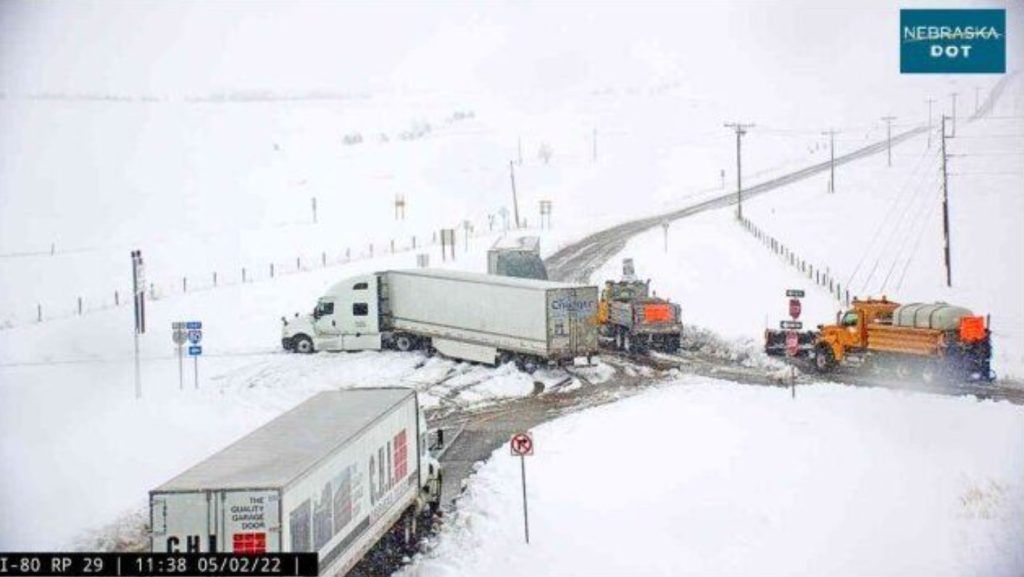 Nebraska snow storm May 2022While Lincoln and the rest of eastern Nebraska were getting soaked with a steady rain Monday, parts of the Panhandle were seeing epic snowfall.

There was a report of 15 inches of snow near Kimball and 11 inches near Potter, according to the National Weather Service.

Protect your home and car with the best EMP, solar flare and lightning shield available…

The heavy snow caused an hours-long closure of Interstate 80 on Monday from Big Springs to the Wyoming border due to multiple crashes in both direction.

Measurable snow fell as far east as Grand Island, but most of the precipitation east of the Panhandle fell as rain. Grand Island, North Platte and Kearney all got between 1 and 1½ inches of precipitation, while Hastings got more than an inch and a half.

Lincoln’s official total Monday was 1.39 inches, bringing its total precipitation over the past five days to more than 4 inches. Omaha got slightly more than an inch of rain.

The cloud cover that produced the rain also kept temperatures unseasonably cool. Lincoln’s high Monday of 47 made it the coldest day in May since May 4, 2013.

Temperatures will warm into the upper 50s through Thursday, with significant chances of rain again on Wednesday and Thursday. The weather service says Lincoln and areas south could see up to 1½ inches of rain over the two days.

A steady warmup is forecast to continue through the weekend, with a high in the mid-60s on Friday, the 70s Saturday and Sunday and the low 80s by Monday.

Snowy conditions in May atop Mauna Kea force closure of road

Heavy fog and icy conditions have closed the Mauna Kea Summit Access Road to the public along with the Visitor Information Station.

Located at an elevation of 9,200 feet, the station is reporting downright wintry conditions with ice and snow on the road, freezing temperatures and thunderstorms.

Snow in May in Hawaii — Winter weather advisory issued and road to summit of Mauna Kea has been closed #Hawaii #HIWX #Snow @KITV4 pic.twitter.com/lxMjpCPssc

A time lapse video from the summit over the last 24-48 hours shows a healthy dusting of snow falling on the mountain. Monday afternoon, temperatures dropped to 30 degrees, but factoring in wind chill, it felt like 21 degrees, officials said.

Rangers will continue monitoring road and weather conditions and will reopen the road to the public when the conditions are safe.

Rare: Taiwan’s highest mountain gets snow in May

A rare May snowfall hit Taiwan’s highest mountain Monday afternoon, caused by strong and very moist easterly winds sweeping through the island, according to the Central Weather Bureau (CWB).

During this week the province of Neuquén was affected by a storm of snow and white wind that caused roadblocks and blown up roofs.

Gusts exceeded 100 kilometers per hour. The Gendarmerie had to assist a dozen people stranded on roads that became impassable and many stuck in their homes without electricity.

Beijing has seen a sharp temperature drop, with temperatures recorded 13 degrees Celsius lower than Tuesday, accompanied by rain and snow since Wednesday morning, the municipal meteorological bureau has said.

Snow has hit mountainous areas in the suburbs of Beijing, with the highest daily temperature dropping to 10.7 degrees Celsius from Tuesday’s 23.2 degrees Celsius.

The average precipitation in Beijing was 2.6 millimeters between 5 a.m. and 3 p.m. on Wednesday.

Valencian Community registers 65 litres/m² and 1,400 lightning discharges in 4 hours this Monday, May 2

Orange weather warning in the southern interior of Valencia, and the north of Alicante. Strong hailstorm, flooding…

In the mountains, the hail turned into ice, producing an image like a blanket of snow covering the ground.

Well, this is all about weather engineering, isn’t it? [JournalStar, HNN, Focus Taiwan, BNN, SB, EWN]

StrangeSounds.org is now running ad-free CLICK HERE TO SUPPORT MY WORK…If you send more than 25$, I will send you a small but beautiful gemstone…

It’s so hot in India landfills are spontaneously combusting (video)

This is what happens when you are too greedy! Ten people dead in Poland’s second mining disaster in a week

This is unprecedented territory: Millions must cut water use in drought-stricken California

US weather forecast for next week looks like something “out of this world” – Enormous storm to produce blizzard, widespread severe weather next week