An asteroid called 1998 QE2 is set to whiz past Earth today afternoon, at a safe distance that’s about 3.6 million miles away from a collision with our homeworld. As it got closer to us, though, astronomers made a cool discovery: 1998 QE2 has its own orbiting moon. 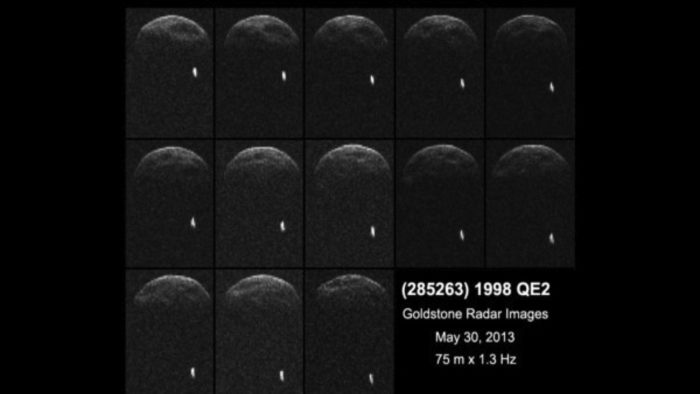 According to NASA at JPL (Jet Propulsion Center):

The radar imagery revealed that 1998 QE2 is a binary asteroid. In the near-Earth population, about 16 percent of asteroids that are about 655 feet (200 meters) or larger are binary or triple systems. Radar images suggest that the main body, or primary, is approximately 1.7 miles (2.7 kilometers) in diameter and has a rotation period of less than four hours. Also revealed in the radar imagery of 1998 QE2 are several dark surface features that suggest large concavities. The preliminary estimate for the size of the asteroid’s satellite, or moon, is approximately 2,000 feet (600 meters) wide. The radar collage covers a little bit more than two hours.

The closest approach of the asteroid occurs on May 31 at 1:59 p.m. Pacific (4:59 p.m. Eastern / 20:59 UTC), when the asteroid will get no closer than about 3.6 million miles (5.8 million kilometers), or about 15 times the distance between Earth and the moon. This is the closest approach the asteroid will make to Earth for at least the next two centuries. Asteroid 1998 QE2 was discovered on Aug. 19, 1998, by the Massachusetts Institute of Technology Lincoln Near Earth Asteroid Research (LINEAR) program near Socorro, N.M.

Here a long video about this asteroid and its fly-by: