This year, the hurricane season in the Atlantic begins June 1st and ends November 30th. The Eastern Pacific hurricane season begins May 15th and also ends November 30th. On earth, the hurricane period is predicted to be “active to extremely active” with 7 to 11 hurricanes with winds of at least 74 mph and 3 to 6 of which could become major hurricanes with winds above 111 mph (source). For comparison, Hurricane Sandy caused over $71 billion in damages with sustained winds of “only” 80 mph back in 2012.

Our Earth is not the only planet of our solar system to experience amazing weather phenomena. A month ago, scientists from the Cassini Imaging Team recorded what they named a ‘mysterious hurricane at Saturn’s North Pole’. 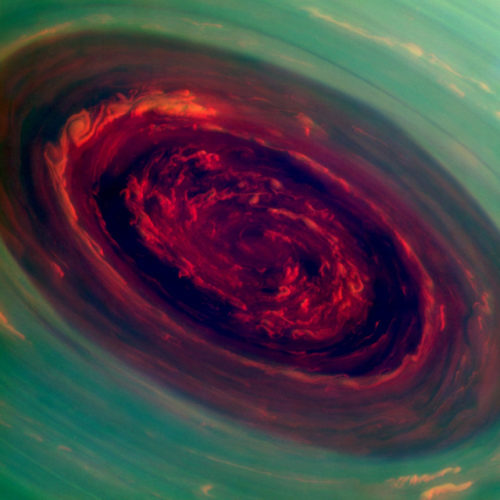 The storm features winds travelling at a rate of 150 meters per second and an eye that’s 20 times larger than the average hurricane on Earth. Amazing speeds compared to those measured during a Gaia’s Hurricane.

The eye of the hurricane is about 1,250 miles (2,000) wide, and it swirls inside a large hexagon-shaped weather pattern. It’s located at the very tip-top of the planet where it’s locked in place and unable to migrate. In contrast, our hurricanes migrate. 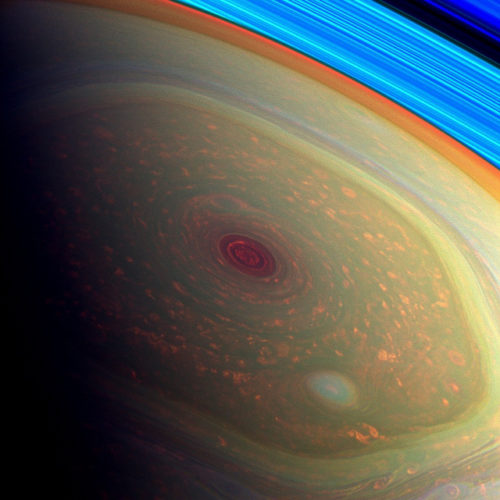 The eye of the hurricane is featured in red, while the fast-moving hexagonal jet stream appears in yellowish green. Low lying clouds are featured in muted orange. The rings of Saturn are shown in vivid blue at top right.

The hurricane is a bit of a mystery as it’s somehow being fueled by the gasses and jet streams underneath and around it. Hurricanes on Earth grow over ocean water. 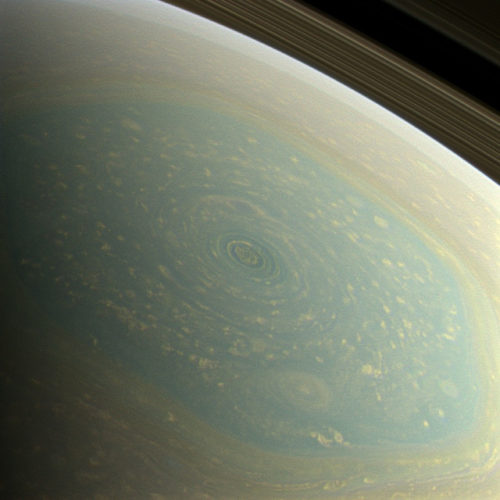 A natural color view of the storm illuminated by the sun. Saturn’s rings at top right.