Do Massive Earthquakes Increase the Risk of New Tremblors?

This is what we actually think. However, the answer to this question is: not always! In fact, one recent quake near Sumatra, Indonesia, seemed to actually have quietened global earthquakes (Seismological Society of America’s annual meeting in Salt Lake City April 19 2013).

The amazing magnitude-8.6 Indian Ocean earthquake, which occurred on April 11, 2012, was the largest strike-slip shake-up ever recorded in history with tremors lasting for up to six days. 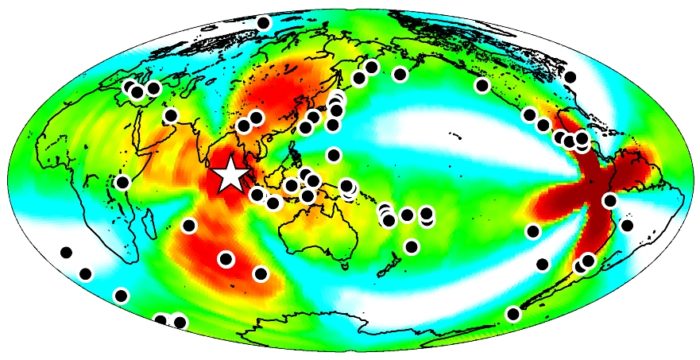 A map of the earthquakes triggered around the globe (shown as black dots) within a week of the April 11, 2012 earthquake off the coast of Sumatra (shown as a white star). CREDIT: Fred Pollitz, USGS

But once the triggered quakes stopped, the number of moderate earthquakes dropped in for more than three months. In other words, seismic monitors detected no earthquakes bigger than magnitude 6.5 for 95 days. However, they normally hit every 10 days.

So, did the Indian Ocean quake delay earthquakes?

Scientists believe that in the case of the Sumatra’s quake, the dynamic seismic waves were so powerful that it decreased the chance of an earthquake. In order to embody this theory, these results have to be corroborated by findings and measurements from other large quakes in other regions from around the world.

Although the Indian Ocean earthquake may have had a rare calming effect after some time had passed, it did immediately spark a global furry of quakes, as many massive earthquakes often do.

The risk of large earthquakes (> magnitude 5.0) is of 1 or 2 percent in the hours following a large earthquake and thus far less frequent than anticipated. These larger aftershocks can be delayed by up to nine hours. In contrast, their smaller magntiude-2 and magntiude-3 counterparts may rupture as soon as 45 minutes after the first big quake.

Why do some large earthquakes seem to trigger other temblors and other don’t?

This will take long and long to know. Processes involved are probably much more complex than what was previously thought. It may be linked to the type of earthquake, to the level of frictions and pressures developed during the earth mass movements.

A video about earthquake prediction:

This information will be crucial to improve quake prediction and thus reduce risks and potential threats created by such geological events!