What was this mysterious white halo spotted from La Réunion to South Africa and Zimbabwe on September 29, 2013?

As shown in the pictures, a bright point, like a star, surrounded by a hazy white halo, was moving quickly while flashing during long minutes in the sky of La Réunion, Mayotte and Mauritius. And this phenomenon seems to be global as it has been reported over South Africa and Zimbabwe.

This video was caught on Mauritius:

It seems that the International Space Station crossed the area just at the time of the event. Could this weird phenomenon be the result of a flash iridium from ISS? Could it be related to a new type of rocket (Falcon 9 v1.1 rocket)?

Or could it be the reflection of sunlight on the solar pannels fixed on the ISS?

Or is this strange white halo a comet with a weird tail?

Better! Is it a meteor of fireball explosion?

ain, this mysterious phenomenon was also spotted over South Africa and Zimbabwe. This blog has an interesting explanation for this weird sky phenomenon. 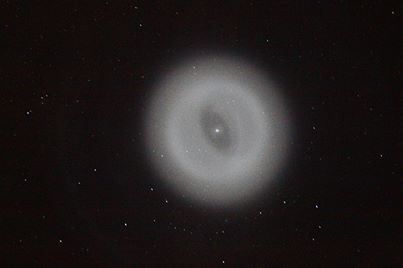 But, I bet this weird circular halo is related to a Falcon 9 v1.1 rocket dumping liquid oxygen before trying the worlds first “soft landing” with a fully reusable rocket. What do you think?