You probably remember the huge Meteorite explosion that occurred last February over Chelyabinsk. Well, it seems that a huge chunk of the Russian Meteorite was recovered and pulled from Lake Chebarkul in the Urals. If it turns out to be true, it would represent one of the top ten largest meteorite fragments ever found with a weight of 570 Kg (>1200 pounds) 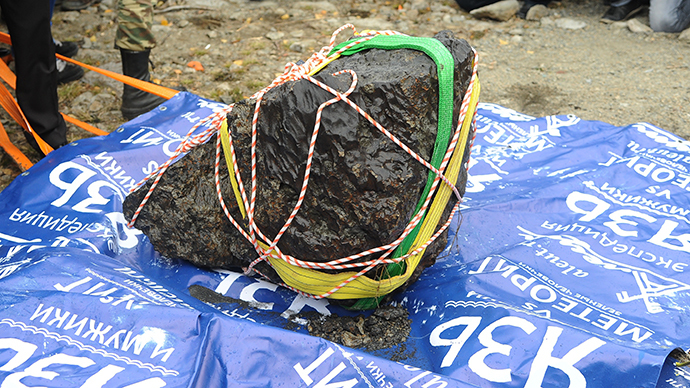 Is this a chunk of the Russian Meteorite? Photo: RIA Novosti / Aleksandr Kondratuk

The largest-discovered fragment of a Russian meteorite, weighing around 570 kilograms, has been lifted from the bed of  in the Urals. The huge meteorite chunk split into three pieces when scientists tried to weigh it. The precise weight could not be established because the heavy object broke the scales.

“The preliminary examination… shows that this is really a fraction of the Chelyabinsk meteorite. It’s got thick burn-off, the rust is clearly seen and it’s got a big number of indents. This chunk is most probably one of the top ten biggest meteorite fragments ever found,” said Sergey Zamozdra, associate professor of Chelyabinsk State University, as cited by Interfax news agency.

He explained that it was important to establish the weight of the fragment in order to learn more about the qualities of the whole of the meteorite. The lifted chunk was taken to the regional natural history museum. The plan is to have a small sample of it X-rayed to determine what minerals it consists of.