The Louisiana sinkhole formed as a salt cavern collapsed just outside the town of Bayou Corne, Louisiana.

Homeowners have been displaced… But what about the 38 feral kittens of Bayou Corne? 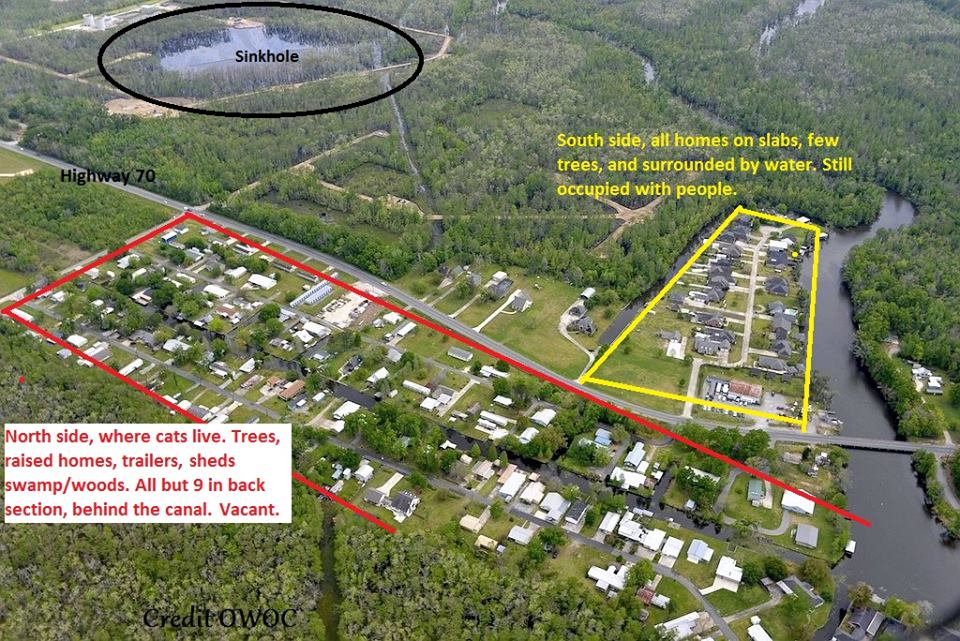 In August of 2012, a salt cavern maintained by the mining company Texas Brine collapsed, creating a sinkhole outside the town of Bayou Corne, Louisiana, and prompting a mandatory evacuation order that has yet to be lifted.

Two and a half years later, the sinkhole has grown to 31 acres, Texas Brine has reached a $48.6 million settlement with displaced homeowners, and the company is considering bulldozing much of the town and converting it into “green space.”

But it’s not just Bayou Corne evacuees who are looking for a new place to live—the neighborhood near the sinkhole is still home to 38 feral cats, who risk losing their suburban habitat if the properties return to nature because of the sinkhole. A woman is fighting for them:

Some of the residents had been feeding different groups of them, but those residents are all gone now. One woman had been trying to drive the hour from Baton Rouge every other day to feed one group of the cats, but Donachricha knew that wasn’t going to last long. She said if the woman could provide food, she would feed the cats for her, and she has.

Texas Brine spokesman Sonny Cranch said he couldn’t say when demolition will occur. The company donated $1,000 to a nonprofit Donachricha was working with to get some of the cats spayed and neutered. All but three of the 38 cats are now spayed or neutered — one of the remaining ones is a newer arrival that was recently dumped there, and the other two she hasn’t been able to catch.

“We support her efforts,” Cranch said. “Hopefully she’ll be successful in finding homes for these animals.”

Post by The Kajun Kitties Of Bayou Corne Louisiana.

Hopefully she’ll be successful in finding homes for these animals.