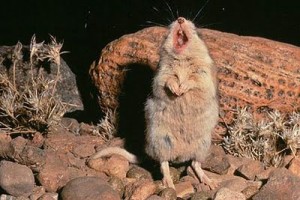 These nocturnal field mice stand on their hind legs, put their heads back and howl like wolves.

This is not from a Sci-Fi horror movie. No, these critters are loud, carnivorous and heard up to 100 yards away in South Texas.

It is pretty hard to believe something 6 1/2 inches long, weighing less than .08 pounds could produce such a piercing, high-pitched howl. Yes, that the scream of the Northern Grasshopper Mouse.

Rodents, as a rule, are herbivorous. However, northern grasshopper mice are carnivores named for their favorite summer food: grasshoppers and other insects. They hunt prey much like a cat, or a weasel.

Rather than construct their own burrows, they usually parasitize the burrows of other small mammals and are thus solitary animals except during breeding season.

If food gets scarce, they will cannibalize their own species. Watch the mouse having a scorpion for dessert!

Why do they howl?

Whether they howl to establish and maintain territories, call or “sing” to attract a mate, or for some other reason, is unclear. But howling may be a part of their complex courtship and mating behaviors. Could it be a way to paralyze the prey by the sound? Or, do they howl spontaneously, enjoying standing up on their hind legs and “singing”? Who knows?

If your children suggest captured grasshopper mice as pets, be aware they do howl at night, loud enough to wake a family.