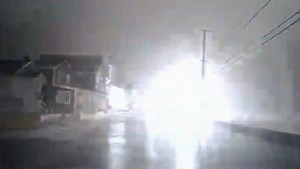 While the flooded road was already unsafe for driving, the exploding transformers made a bad situation even worse.

Watch the dramatic moment giant waves cause transformer to spark.

Waves crashed into transformers during high tide, causing sparks that lit up the night sky.

This video was recorded by Wells Police Sgt. Allen Wilson on his dash camera.