What is this mysterious blue-green light crossing the sky of Kherson, Ukraine on April 11, 2016?

Two dashcam cameras recorded the amazing sky event at approximately 9:34 pm Moscow time, so 7:34 pm (UTC). Has anybody witnessed it?

The Lyrid meteor shower hasn’t started yet, but the sky is already producing awesome natural fireworks.

A blue-green fireball (turquoise in the video description) was filmed by two dashcam cameras flying in the sky of Crimea and Kherson on April 11, 2016 7:34 pm (UTC).

Is this really a fireball? Most probably although it could have been mistaken for a space junk reentry or a missile due to the long duration of the disintegration process. But no reentries took place, the next one being scheduled for April 15, 2016.

April’s shooting stars last from about April 16 to 25. The peak morning is April 22, though under the glaring light of the full moon.

About 10 to 15 meteors per hour can be expected around the shower’s peak on a dark, moonless night. Lyrid meteors tend to be bright and often leave trails, so maybe a meteor or two might overcome the drenching light of the full moon in 2016.

The Lyrids are known for uncommon surges that can sometimes bring the rate up to 100 per hour. Those rare outbursts are not easy to predict, but they’re one of the reasons the tantalizing Lyrids are worth checking out. 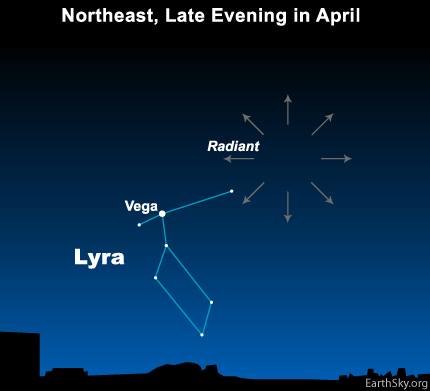 The radiant for this shower is near the bright star Vega in the constellation Lyra (chart here), which rises in the northeast at about 10 p.m. on April evenings.

Turn your eyes to the sky!