The New Madrid seismic zone of southeast Missouri and adjacent States is the most seismically active in North America east of the Rockies and is currently overdue. 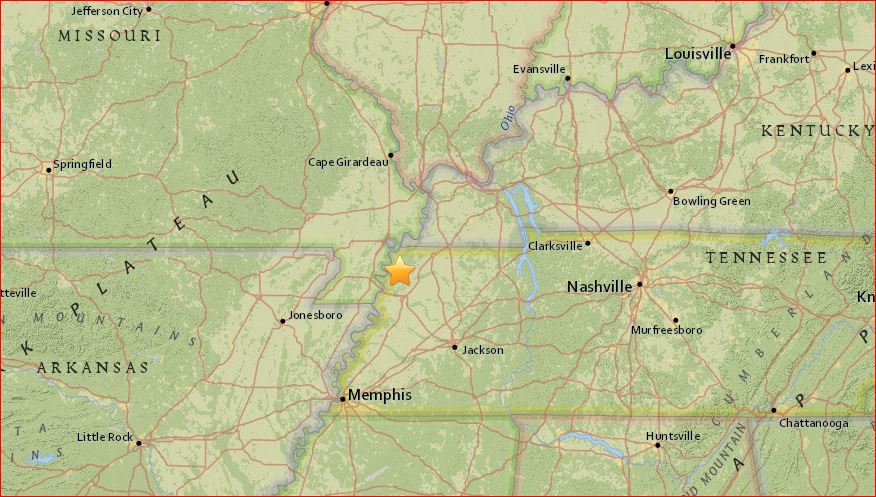 During the winter of 1811-1812 three very large earthquakes devastated the area and were felt throughout most of the Nation. They occurred a few weeks apart on December 16, January 23, and February 7. Hundreds of aftershocks continued for years. Since 1900, moderately damaging earthquakes have struck the seismic zone every few decades. About twice a year people feel still smaller earthquakes that do not cause damage.

The frequency of large earthquakes in the NMSZ is still being debated. According to the Department of Natural Ressourses of Missouri, the NMSZ appears to be about 30 years overdue for a magnitude 6.3 quake. About 75 percent of the estimated recurrence time for a magnitude 7.6 earthquake has elapsed since the last quake of this size occurred in 1812. The probability of a repeat of the 1811-12 (magnitude 7.5-8.0) earthquake is 7-10%.

Earthquakes in the central and eastern U.S. can be felt over an area as much as ten times larger than a similar magnitude earthquake on the west coast.

This animation shows the simulated ground motion of the Earth’s surface that could occur in the central U.S. region for a magnitude 7.7 strike-slip earthquake on the southern section of the New Madrid seismic zone:

The earthquakes of the New Madrid seismic zone occur within a large network of faults called the Reelfoot rift formed about 500 million years ago. Now the region is undergoing east- west shortening, and the ancient faults of the Reelfoot rift are being reactivated to generate earthquakes.

The network of faults in the seismic zone is buried beneath hundreds to thousands of feet of sand and mud.

However, many earthquakes occur away from the few known faults, so there must be additional, unknown faults that can generate earthquakes in the seismic zone.