For those who haven’t noticed it yet, the New Madrid seismic zone represents one of the most active quake region of the United States and thus is at significant risk for damaging earthquakes as this article will show. 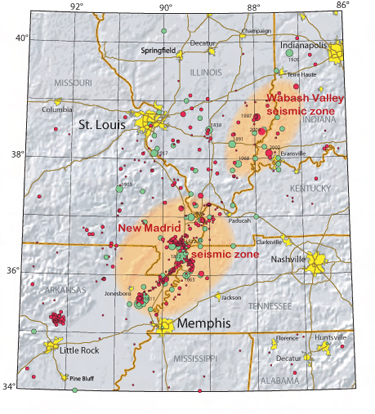 Three main shocks were felt in 1811-1812. These massive tremors are commonly named the “New Madrid earthquakes” after the largest Missouri town at this time, New Madrid, on the Mississippi River between St. Louis, Missouri and Natchez, Mississippi. These quakes represent some of the largest in the United States since its settlement by Europeans due to their large area of damage (600,000 square kilometers), and their widespread area of perceptibility (5,000,000 square kilometers). For example, the area of extreme shaking was two to three times as large as that of the 1964 Alaska earthquake and 10 times as large as that of the 1906 San Francisco earthquake. However, the magnitude of these earthquakes is not known since no seismographs existed at this time. To evalute the quake magnitudes, scientists depended on interpretations of journals, newspaper reports, and other accounts of the ground shaking and damage. The first principal earthquake, M7.7, occurred at about 2:15 am (local time) in northeast Arkansas on December 16, 1811. The second principal shock, M7.5, occurred in Missouri on January 23, 1812, and the third, M7.7, on February 7, 1812, along the Reelfoot fault in Missouri and Tennessee. Each of the main shock was followed by strong aftershock ranging from M6.0 and 6.5 and located in Arkansas and Missouri.

These earthquakes only killed one person since at this time it was not a populated area. These earthquakes however triggered subsidence (up to 9 meters), cracks in the ground, ground uplifts, fissures, sinkholes, craters, sand blows, landslides, and sunken land. On the Mississippi river, these quakes generated huge waves (little tsunamis, seiches), river bank failures. Even islands disappeared. These collateral damages were reported over an area of 78,000 – 129,000 square kilometers, extending from Cairo, Illinois, to Memphis, Tennessee, and from Crowley’s Ridge in northeastern Arkansas to Chickasaw Bluffs, Tennessee. Learn more here.