These animals migrate from northern Canada to northern Mexico where they spend the winter.

Meanwhile, on the other side of the ocean, around 200 dead or dying starlings fell from the sky and rain down on cars in Pembrokeshire, Wales

A woman driving home was greeted with an “eerie sight” as she came across dead birds lying on a road in Pembrokeshire.

Michaela Pritchard said it looked like a “massacre” as she travelled on the road between Waterston and Hazelbeach on Thursday evening. 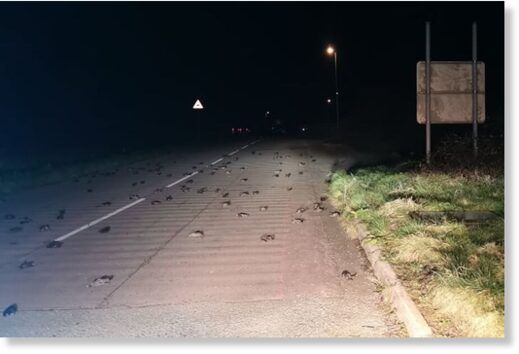 There was seemingly little explanation for what caused around 200 birds to die so suddenly, with some pointing to the nearby Dragon LNG plant as a possible cause.

One man added he heard a loud bang before seven or eight birds rained down on his car in nearby Waterston.

People suggested other theories for why the birds had died, including electrocution or being chased by a bird of prey at dusk before hitting the road surface.

Michaela said she didn’t hang around as it was such an eerie sight and instead phoned Pembrokeshire council to report what she’d seen. She said they were already dead when she came across them at around 8pm.

Ian Mccaffrey works in Waterston and said some birds fell out of the sky onto his car just after he heard a large “electrical-type” bang. He said: “When I left work last night [Thursday] I heard a bang and then a load of birds landed on my car.” 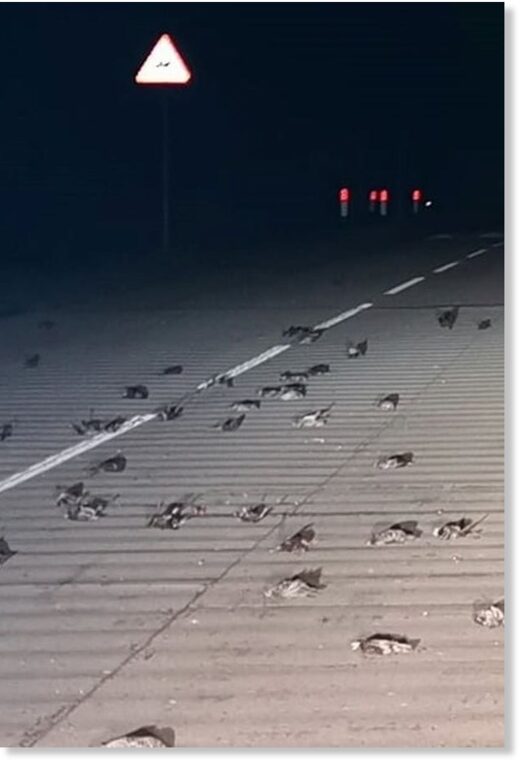 He reckoned at least six landed on the ground and added: “Every now and again you will hear a bang that is coming from what I think is a crow-scarer that farmers use. However this bang was more like an electrical bang – not quite as loud as lightning but similar.

“It’s like there were hundreds of birds in the sky and all of a sudden they just died and fell to the ground. It was quite surreal last night to be honest with you – not something I have ever experienced before.”

Claire Eaton, who lives close to the road, went out at 11pm and said it was “traumatic” to see. She thought the birds had “died on impact” and even managed to scoop one of the stunned birds up and take it home, still alive. She’s planning to release it later today.

“About an hour before I was at Neyland Marina walking my dog and I saw a big flash and I didn’t think anything of it,” she said. “Maybe something spooked them and they flew into the pylons.”

The nature lover said she strongly believed that whatever was behind the incident was “manmade”. She added: “I feel quite passionate about it – I think we should respect wildlife more in general.” 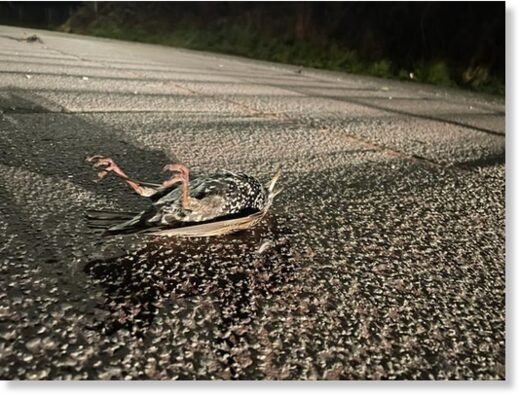 A spokesperson for Dragon LNG said there had been nothing unusual at the plant on Thursday and it was carrying on work as normal. She added: “It’s in the vicinity but it’s normal operations at Dragon LNG. There was nothing different at the plant.”

Pembrokeshire Council said it was aware of the incident. A spokesman added: “We received a call at around 9pm on 10 February regarding a number of dead starlings on the Hazelbeach Road, Waterston.

“Officers attended the site and there were around 200 starlings found dead on the road. The authority undertook a clean-up and removed the dead birds from site.

“There is no clear indication as to the cause of these deaths. We have reported the incident to the Animal and Plant Health Agency.”

It’s clear that we want always better wifi connection for our phones and homes… But I think our health is much more important. 5G is poison! [ABCNoticias, Wales Online]