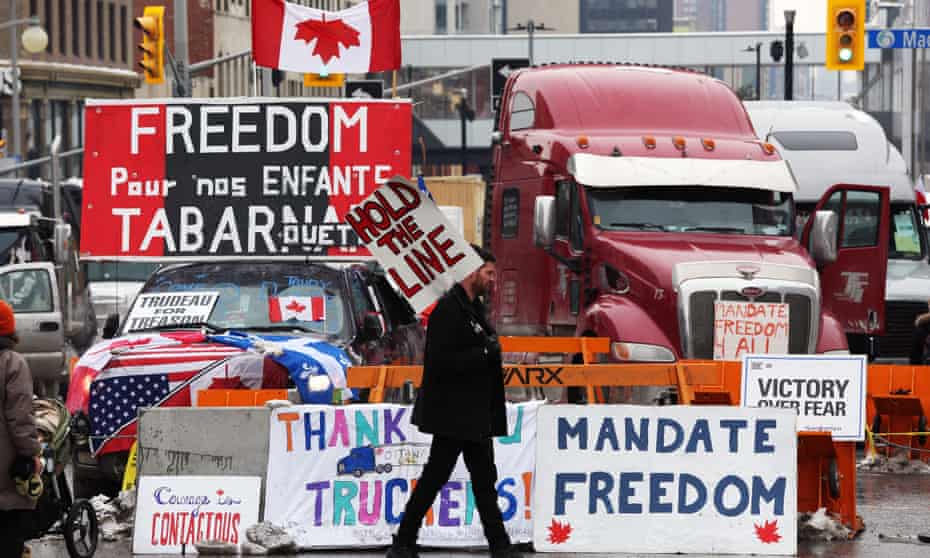 Ottawa police have begun arresting protesters encamped in the downtown core, less than two hours after the city’s interim police chief warned that action to remove “Freedom Convoy” demonstrators from the area was “Imminent.”

The Ontario Provincial Police and RCMP are currently aiding Ottawa police through a newly established integrated command centre, and a spokesperson for Quebec’s public security minister confirmed that provincial police are heading to Gatineau to provide further aid.

More arrests here in Ottawa. Two of the original organizers of the Freedom Convoy are now in jail. Tamara Lich and Chris Barber.

Tamara told she is not afraid.

Another dark day for Canada and our once-famed Charter of Rights and Freedoms. pic.twitter.com/2GXwWmleCE

Police hand out a notice to protesters on the 21st day of a protest against COVID-19 measures that has grown into a broader anti-government protest, in Ottawa, on Feb. 17, 2022.

Meanwhile, a class action lawsuit against the “Freedom Convoy” in downtown Ottawa has added 31 new named defendants and ballooned to a $306-million claim for the disruption to lives and livelihoods from the now three-week old occupation.

The proposed class-action lawsuit over Ottawa protests adds Union 613 and Happy Goat Coffee as plaintiffs, joining Zexi Li, as claim expands to include a class of businesses. Claim now up to $306 million. pic.twitter.com/5vX873lYcE

“All the individual truckers who are still in downtown Ottawa, still causing mayhem, still causing chaos, still causing disruption to the residents and businesses of downtown Ottawa, it’s time to go home. And when you get home, I strongly recommend you get independent legal advice. Don’t listen anymore to the organizers. You’ve been led down a path that is going to cause you some serious financial consequences.”

“Anyone who has materially contributed financially to the continuing occupation of downtown Ottawa knew what they were doing. Particularly the people who contributed to GiveSendGo who by that time knew the unlawful behaviour of the convoy participants,” he said. [CTV, Ottawa Citizen]

Has a group of people ever been sued by an entire city before? Terrifying how Canada turned into a dictatorship!

Mind conditioning! Timing of Pelosi and Memphis video to disrupt the news cycle