An expansive and multi-faceted storm system is forecast to strengthen rapidly as it travels from the Rockies to the Great Plains next week, and meteorologists say it could result in a five-day stretch of threatening severe weather as well as a robust snowstorm that could produce dangerous blizzard conditions.

Some locations over the north-central United States may be buried under feet of snow, while a severe weather outbreak is destined to unfold and may stretch from the Gulf Coast to locations as far north as the Great Lakes.

This coming storm has probably been manufactured with the help of one or several of these geoengineering patents. Weather warfare is real… And it’s not for the ‘GOOD’ of humanity… 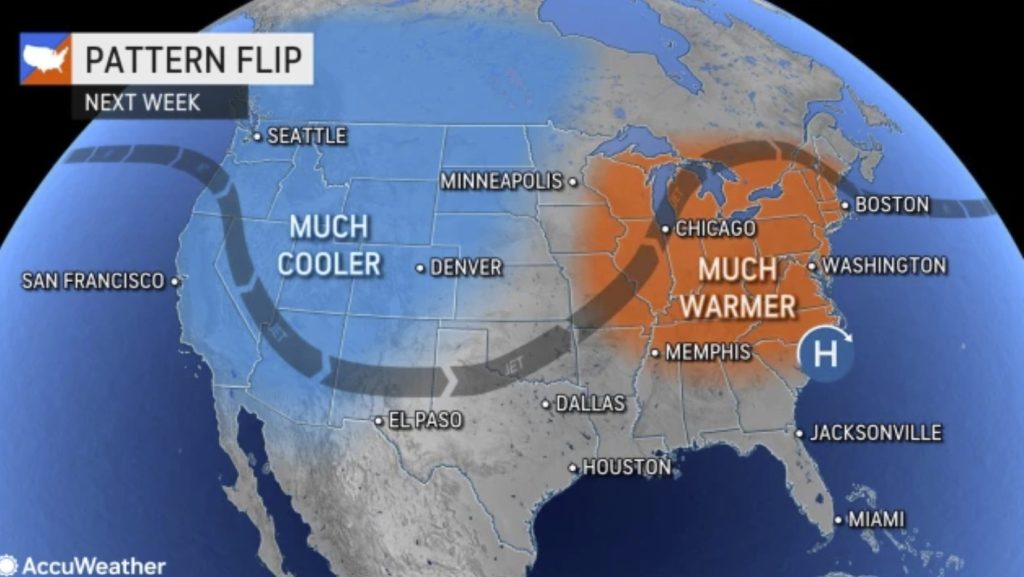 Cold air diving into the western U.S. will collide with surging warmth and more humid air in the Eastern states and set the stage for a high-impact storm in between, according to Meteorologist Brandon Buckingham.

“Numerous disruptions to travel and shipping efforts are likely with the potential for power outages as a result of rain, thunderstorms, wind and snow from the unfolding and strengthening storm next week over the middle of the nation,” Buckingham added.

Much cooler air will plunge southward in the West starting later this weekend and hang around into next week. As this happens, the storm, currently moving over the open Pacific, will make landfall along the coasts of Oregon and northern California Sunday night and swing inland. Areas of low-elevation rain will fall with several inches of mountain snow in the Northwest.

Since the storm will still be relatively weak over the western third of the U.S. compared to its intensity as it grows stronger over the northern Plains, precipitation may be unremarkable. 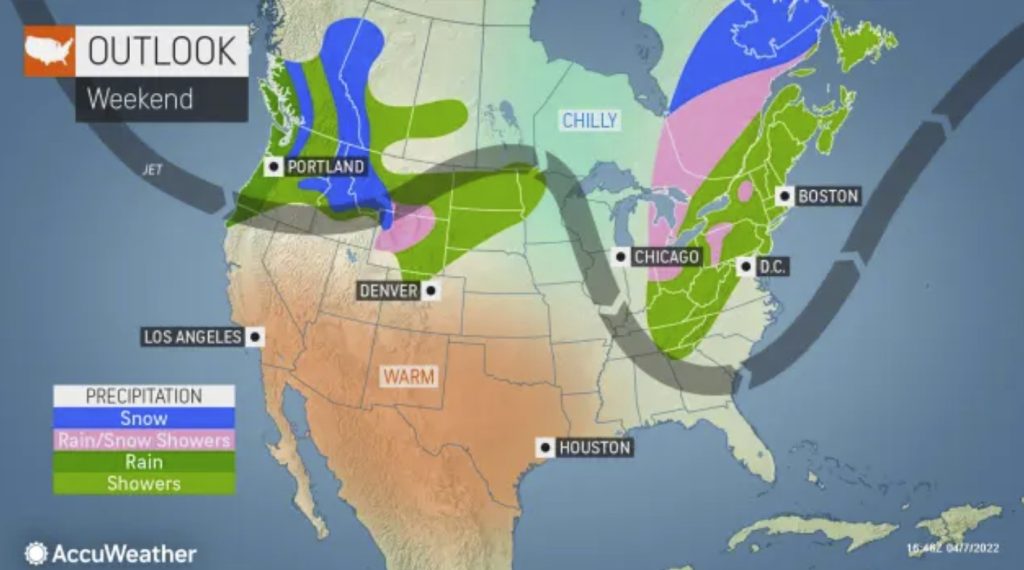 Rain is forecast for lower elevations while snow showers could occur in the mountains in Southern California and other parts of the Southwest from Monday to Tuesday. Some of the showers can turn gusty with thunder, lightning and even hail in some cases for San Francisco, Los Angeles and San Diego.

Forecasters say the rain or mountain snow in the Southwest is not likely to have a significant impact on seasonal totals and the long-term drought. Gusty winds can kick up dust and raise the risk of wildfires in locations where rain does not fall.

Feet of snow, blizzard may unfold from Rockies to northern Plains

As the storm pivots across the interior West from Monday to Tuesday, it is likely to gain some strength. Locally heavy snow may fall on parts of the higher elevations, including the Wasatch Range in Utah, while rain falls and soaks some of the valley floors from Nevada to western Colorado.

As the storm emerges from the Rockies and swings northeastward across the Plains from Tuesday to Thursday, the atmospheric fireworks are likely to begin. 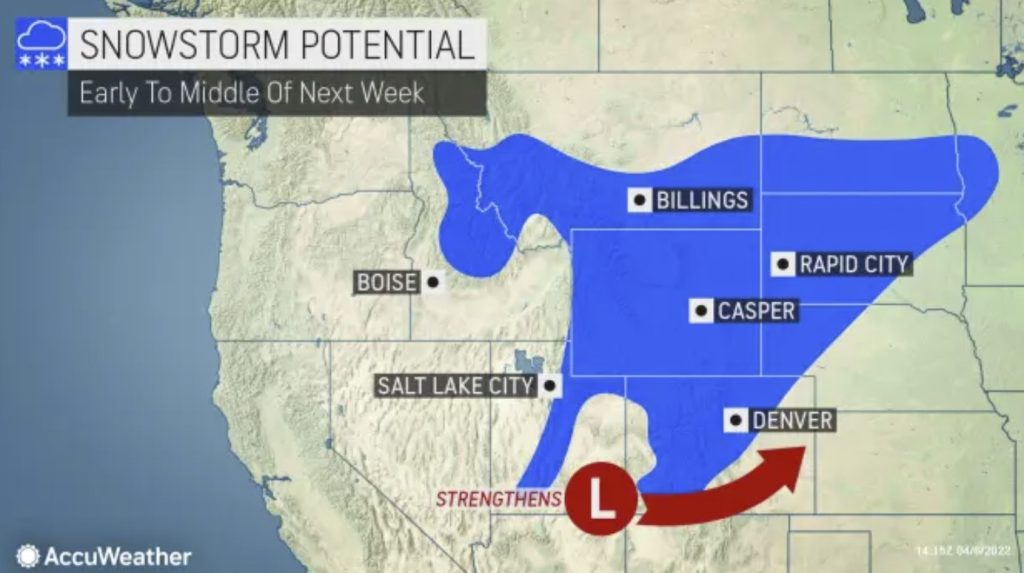 A slow-moving swath of heavy snow, perhaps totaling 1-3 feet, is likely to impact areas from central Colorado and Wyoming and southeastern Montana to portions of western Nebraska, the Dakotas and parts of Minnesota from Tuesday to Friday.

“Blizzard conditions are likely to unfold as the storm gains strength, snow piles up and winds increase,” Buckingham said. Extensive blowing and drifting snow can occur which could result in road closures close due to high-velocity winds and massive drifts.

It is possible the storm far exceeds the blizzard criteria of one-quarter mile visibility or less with winds of 35 mph or greater for three consecutive hours. Should the storm develop to its full potential, gusts may frequent 50 mph with near-zero visibility for hours in some cases over parts of the northern Rockies and Plains.

“Most long-term residents of the northern Plains and Rockies know that April can deliver tremendous snowstorms,” Buckingham said, adding, “for example, the Black Hills of South Dakota, average 10-20 inches of snow during the month of April. It is possible that the Black Hills and other locations in the region could pick up an entire month’s worth of snow from this one storm.”

The exact track of the storm will determine where the heaviest snow extends from the Rockies to the northern Plains. At this time, meteorologists say it appears that Denver and Minneapolis may be just outside of where the storm drops the heaviest snow. However, a southeastward shift in the storm’s track could put either or both cities in the throes of a blizzard. 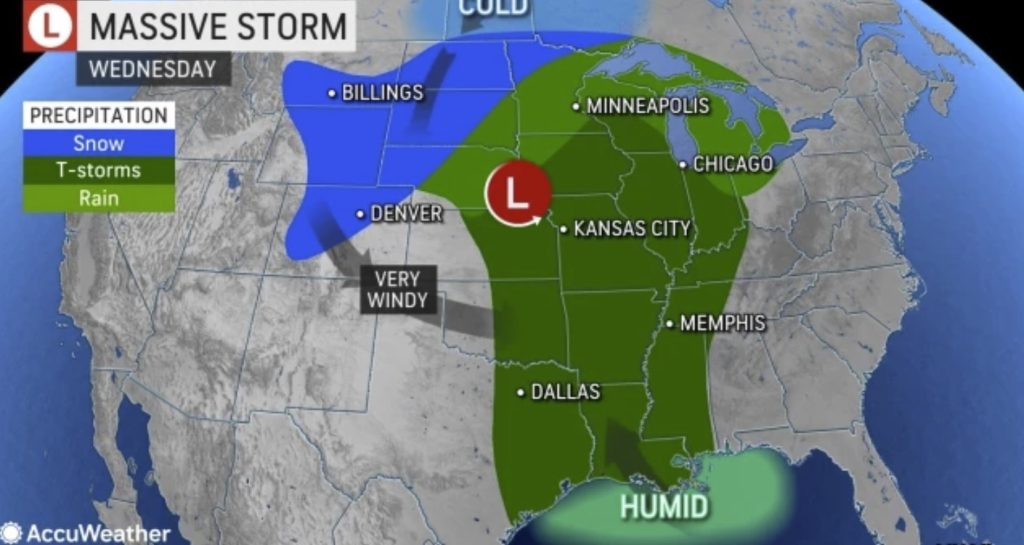 Multi-day severe weather outbreak likely to unfold in central US

On the storm’s southeastern and warmer side, severe thunderstorms are expected to unfold at the start of next week. All facets of severe weather, ranging from high winds, hail, flash flooding and tornadoes are likely in an outbreak that could span Monday to Friday. Severe thunderstorms could even extend from near the Gulf Coast to the Great Lakes from Tuesday to Thursday.

The clash of air masses across the Midwest around the middle of the week can lead to highly changeable weather conditions over a relatively short distance.

Prep: Get a satellite phone to communicate with your loved ones when internet and phones are down… 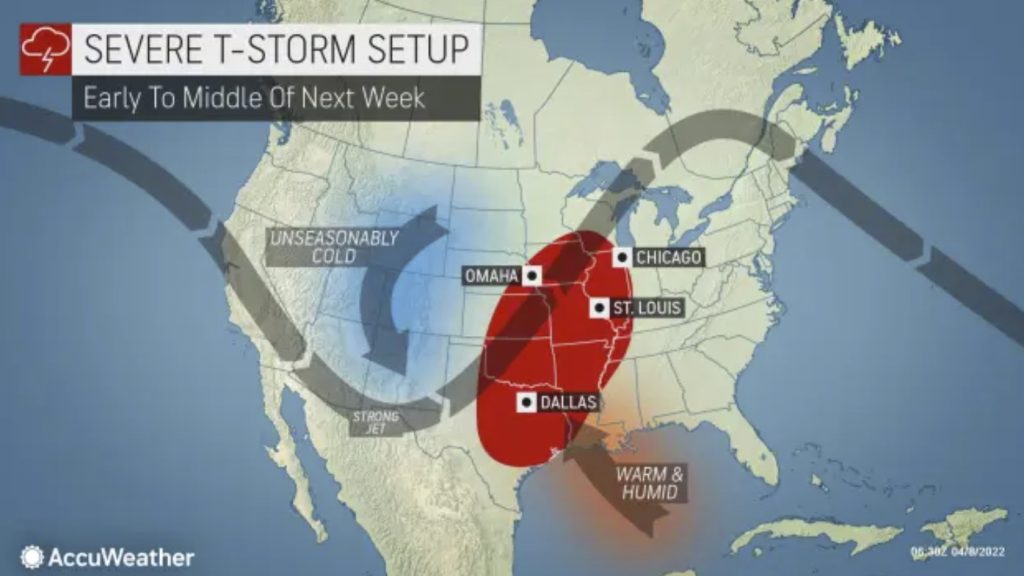 The bulk of the severe weather so far in 2022 has been confined to the southern third of the nation as that’s where the air has been warm and humid most often, forecasters say.

However, because this storm is likely to become so strong, warm and humid air is likely to be pulled 1,000 miles to the north of the Gulf of Mexico. This means that while people in Dallas, Oklahoma City and New Orleans will need to monitor the severe weather situation next week, residents of Omaha, Nebraska, Chicago and Detroit may need to pay close attention to their respective forecasts as well.

The powerful circulation of the storm could trigger damaging winds without thunder and lightning in some cases across the Plains, Mississippi Valley and Great Lakes regions.

Even though the storm may be past its peak by the end of the week, some thunderstorms and strong winds could cause issues across parts of the Appalachians and communities along the Atlantic coast. [AccuWeather]