Can any body else hear strange noises coming from the sky also…??? Glasgow Shawlands (Scotland), 4th April 2013
(2:17am)

Strange Sounds in the sky over Leeds UK April 3 2013

The strange sounds lasted about 30 minutes. Any ideas what this could be? I’ve seen lots of similar videos on here with similar sounds being heard. Yes as you say, these strange sounds remain mysterious! 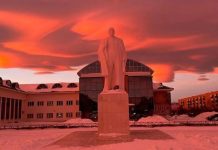