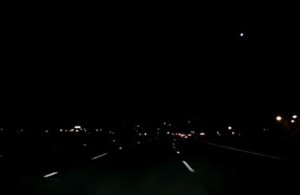 Here are two videos gathered on youtube of a bright meteor that exploded in the Texas sky on Sept. 21 2013 at 9pm local. People in Austin, San Antonio, Houston, Plano, Waco and Abilene, among other cities, described a brilliant flash or a white fireball. Some even caught colors and a sparkling tail. Most reported seeing one, while a few spotted a second, smaller flash.

The first video was captured on a dash cam close to Eastland Texas. The meteor desintegration starts at 9 sec. and ends 13 sec. after the beginning of the video.

The second video is fuzzy, but the luminous sky apparition is still observable.