Houston was flooded friday night. And they left a mark: A huge, eight-foot-deep sinkhole opened up at the intersection of Fairdale and Fountain View in the Galleria Area and started to swallow cars on Monday. Indeed some drivers mistook the cave-in for a large puddle of water and drove right into it. 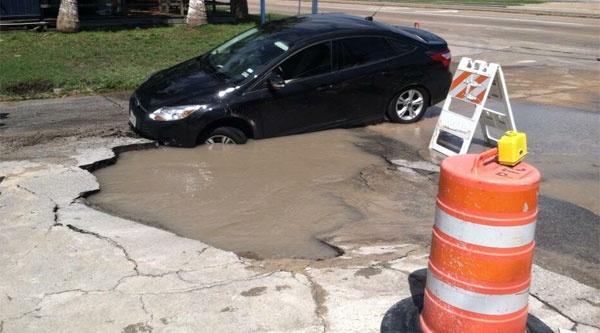 Workers at a nearby restaurant construction site say they reported a big pothole to the city last Thursday but no one responded.

The weekend downpours, exacerbated by a water main break, apparently expanded the pothole into an ever-expanding sinkhole. On Monday afternoon, city crews closed one lane at the intersection to begin repairs. (SOURCE)