This is another heart-stopping video of the Tohoku tsunami destroying a small Japanese port town. Apocalyptic!

Firts, you see an almost dried Okawa River in the small city of Kesennuma city (water disppears before tsunamis). The water rises suddenly and constantly fills up the river bed before spilling over the embankment and flooding the town destructing everyting on its path. Everything is carried further inlands. Nothing resists: debris, houses, cars, boats, trucks are torn away. The mouth of the river is nearly two kilometres away from the location from which the video was shot by Mr. Kenichi Kurakami.

This video is long! Look at it, it’s worth it!

00:10 – The tsunami’s wave trough, which was arriving first, has drained the river
01:45 – The tsunami’s first wave is appearing and steadily ascending the river, probably a couple of metres high
05:00 – While the wand of water rushes by, smoke appears over the harbor – the tsunami’s moving inland by now
05:45 – The water is rising steadily and the people recognize the danger. A police or civil defense man urges all people to evacuate to the school building behind because the tsunami has overcome the harbor’s seawalls. He keeps warning the community using a loudspeaker
07:00 – The cameraman enters the school’s emergency staircase just in time. While still climbing, the water behind him overcomes the river’s embankment and flows onto the school grounds
08:15 – A large wave of debris can be seen approaching from the harbor, simultaneously, the tsunami smashes the passenger bridge next to the school to pieces
09:30 – Large debris, buildings and such arrive at the school. The flooding intensifies. During the next ten minutes, the school ground is flooded with debris and water.
19:15 – The tsunami stops and starts receding. The following shots are filmed at different times and show the large fire which further devastated the harbor and more (but considerably smaller) waves coming in, hours after the first (since it’s nearly dark by then). 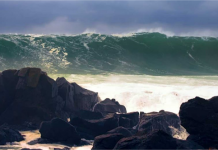 15-Meter High Tsunami Waves Hit Oman 1,000 Years Ago and the Sultanate is Totally Unprepared for the Next One 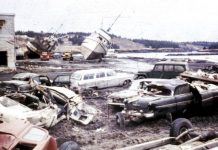 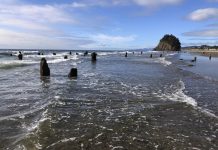