Today I learned that in the ancient Persian Empire, an idea was debated twice: sober and drunk.

Too bad people are not following that anymore… We would probably live in another world (without Ahmadinejad and… Bush!)!

This is how Herodotus describes Persians:

[…] It is also their general practice to deliberate upon affairs of weight when they are drunk; and then on the morrow, when they are sober, the decision to which they came the night before is put before them by the master of the house in which it was made; and if it is then approved of, they act on it; if not, they set it aside. Sometimes, however, they are sober at their first deliberation, but in this case they always reconsider the matter under the influence of wine. […]

Yes, you often believe you got the century’s idea while being drunk… The day after is always another story! 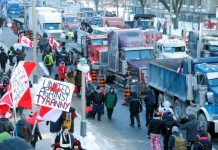 The trucker revolution is spreading around the world