Because of a fast growing island, tsunami fears rise in Japan again.

The island is gowing at an amazing 7 million cubic feet per day. If a large enough piece of that island were to collapse, huge waves could engulf Chichijima within 18 minutes! Nightmarish!

As already reported in a previous post, a new volcanic island off Japan, initially called Niijima, merged with its neighbour island Nishinoshima. The resulting inlet is called Nishinoshima.

It is situated about 600 miles south of Tokyo. If lava continues to mount on the eastern area, part of the island’s slopes could collapse and cause a tsunami. The massive wave would reach within 18 minutes the next inhabited island (Chichijima), possibly killing its 2000 residents.

The 2011 Japan tsunami killed almost 16,000 people after a 9.0 earthquake struck just off the eastern coast. The tremor generated 30-foot waves that ravaged the shoreline and destroyed a nuclear plant.

Well my friends in Japan! Get prepared for the next big one! Hopefully not, but be ready!

The Cascadia tsunami will kill thousands; Can they build an escape?

Earthquake in history: Great Earthquake of Lisbon November 1, 1755 killed 90,000 people in 6 seconds – Tsunami reached US and Canada coasts within...

Andalusia is overdue for a major earthquake and devastating tsunami 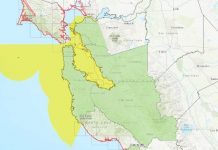