The Sunshine State has a dark side, as the family of Jeff Bush discovered when the 36-year-old man was killed after a sinkhole opened beneath his house. So why is Florida prone to sinkhole?

It is due primarily to the region’s geology. The state is largely underlain by porous limestone, which can hold immense amounts of water in underground aquifers. As groundwater slowly flows through the limestone, it forms a landscape called karst, known for features like caves, springs and sinkholes.

The water in aquifers also exerts pressure on the limestone and helps to stabilize the overlying surface layer, usually clay, silt and sand in Florida. Sinkholes form when that layer of surface material caves in.

The collapse can be triggered by a heavy overload, often caused by a downpour or flooding, or when water gets pumped out of the ground. When water leaves the cavities within the limestone, the pressure that supported the surface material also goes. Depending on various factors, that overlying layer can give way abruptly, as it recently did in Florida, or gradually.

And Florida’s groundwater has been disappearing rapidly as the state’s population grows at breakneck speed: By 2015, Florida is expected to hit 20 million residents, making it the third-largest U.S. state.

To slake a thirsty state’s population, Florida has been aggressively pumping out groundwater, destabilizing its limestone bedrock and contributing to the growing number of sinkholes.

Nowhere is this more true than in “Sinkhole Alley,” the rapidly growing region of west-central Florida surrounding Tampa Bay. Sinkholes can also occur naturally, but from 2006 to 2010, the number of sinkhole claims to Florida insurance companies tripled.

Sinkholes are even more common in Florida during the winter months, specifically in January or February. That’s related to freezes, when farmers pump groundwater onto crops, strawberries and oranges, to protect them from freezing. The other peak in sinkholes in Florida occurs in May and June, which are typically dry months with the year’s lowest groundwater levels. 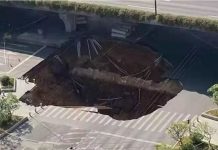 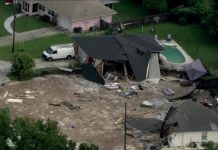 Sinkhole Risks: 40% of the Continental U.S. Is Prone to Sinkholes