Fracking appears to be the origin for a swarm of earthquakes near Fox Creek, Alberta, including a record-breaking tremor with a felt magnitude of 4.4.

That would likely make it the largest felt earthquake ever caused by fracking, a development that experts swore couldn’t happen a few years ago. 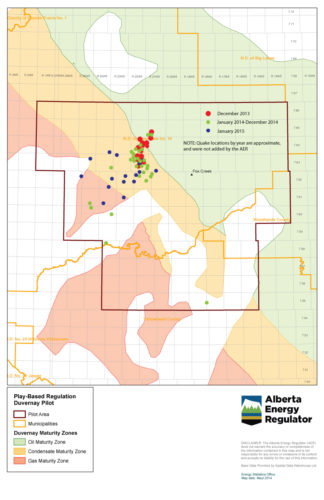 A swarm of at least 15 earthquakes has rattled this January west of Fox Creek in a region where Encana, Talisman, Apache, Chevron Canada and ExxonMobile intensified the drilling and fracking of two-kilometre-long horizontal wells nearly a year ago.

The location of the earthquake is consistent with being induced by hydraulic fracturing operations. Last year, a swarm of 25 small earthquakes in the same area also corresponded closely to hydraulic fracture treatments of oil and gas production wells in the immediate vicinity.

The largest Fox Creek fracking earthquake registered 4.4 magnitude and caused walls to shake and beds to move. And did the industry had a smoke break? No they didn’t. Many are in denial in North America!

Alberta’s oil and gas industry has caused both small and significant earthquakes throughout the province since the 1960s.

The rapid extraction of sour natural gas from the Strachan pool near Rocky Mountain House set off a 4.0 magnitude quake in 1974 followed by 146 tremors in the 1980s, including a 3.4 magnitude tremor.

In 1970, the pumping of water into depleted oil fields near Snipe Lake likely triggered a 5.1 magnitude earthquake, perhaps the largest in the province’s history.

A 1990 report by the U.S. Geological Survey noted that this earthquake “is considered to be the first and largest known Canadian example of an earthquake induced by fluid injection in a producing oil field.”

The injection of steam to melt 400-metre deep bitumen formations in Cold Lake can lift and then drop the land by as much as 10 to 30 centimetres over a month. The heaving of the ground creates a constant stream of micro-earthquakes and frequently fractures well casings.

Since 1958, the industry has pumped more than 2 million barrels of water into old oil formations to coax out more petroleum.

In addition, the province has more than 2,500 wastewater disposal wells.